Home Leicester City Napoli 3-2 Leicester: The Foxes are heading into the Conference League… 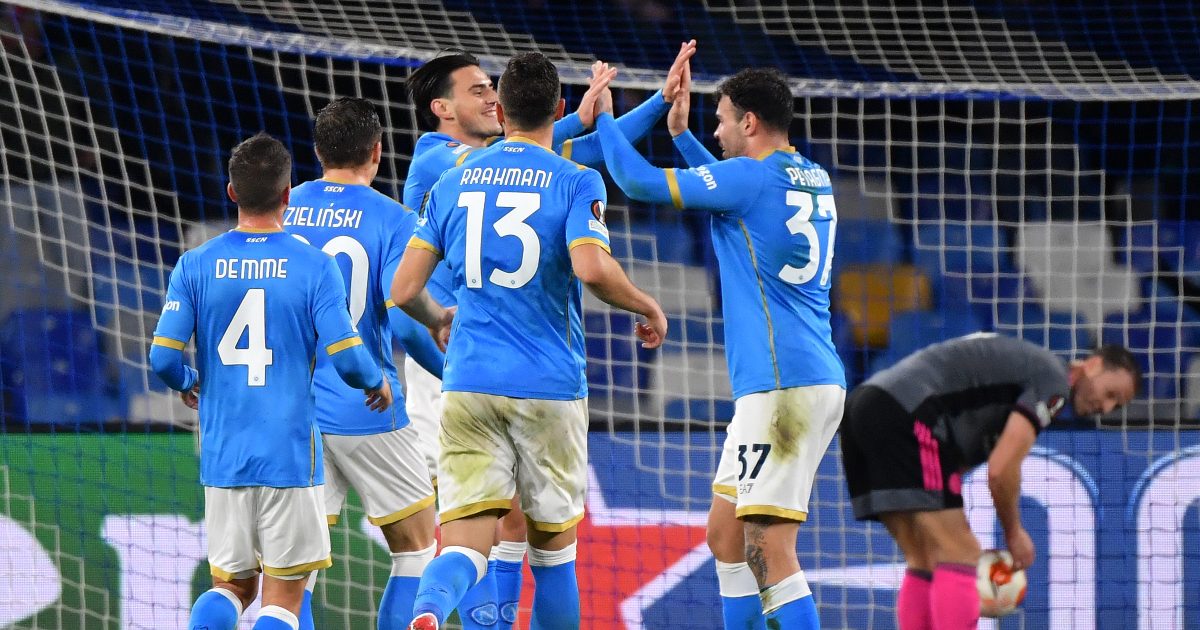 Leicester City are heading for the Europa Conference League as their defeat against Napoli sees them exit the Europa League at the group stage.

Napoli went two goals ahead during an entertaining opening half thanks to finishes from Adam Ounas and Eljif Elmas.

Leicester levelled the game before the break though as Jonny Evans and Kiernan Dewsbury-Hall got on the scoresheet.

Elmas struck again early in the second half and, despite Brendan Rodgers’ side having chances to get themselves level once more, it proved decisive.

Leicester began the night top of Group C, but they ended it in third place and headed into the Europa Conference League after their defeat was compounded by Spartak Moscow’s 1-0 win at Legia Warsaw, with the Russian club topping the table.

Much of the pre-match talk was of Leicester having to leave behind seven players through illness. Rodgers confirmed some of the unnamed players had tested positive for coronavirus, while others had been left at home as a precaution.

But it was a strong Foxes team that took to the field, which included Belgium midfielder Youri Tielemans returning from a five-match absence with a calf problem.

Leicester made a bright start and should have taken an early lead. Dewsbury-Hall charged down the left flank all the way to the by-line and his far-post cross was met by Timothy Castagne inside the six-yard box, but goalkeeper Alex Meret somehow made a smothering save on his goal line.

Napoli went straight up the other end and scored. A mistake by Tielemans, although the midfielder was not helped by the pass from Caglar Soyuncu, resulted in Ounas finding the corner of the net with a low shot across Kasper Schmeichel after four minutes.

It saw the midfielder mark his first start for the club since April 2019 with a goal.

Elmas doubled Napoli’s lead 20 minutes later. Andrea Petagna strolled through the middle of the Leicester defence before unselfishly teeing up Elmas for a tap -in.

With Spartak Moscow also leading at Legia Warsaw, it looked like the Foxes were exiting the Europa League with a whimper.

However, Evans immediately pulled a goal back, smashing home the loose ball from eight yards out after James Maddison’s free-kick had struck a defender and landed in his path.

With 33 minutes on the clock, Leicester were level. Another free-kick was only half-cleared by the hosts and Dewsbury-Hall volleyed the ball into the bottom corner of the net from the edge of the penalty area.

Leicester’s hard work in getting back into the match was almost undone at the beginning of the second half, with only a fine save by Schmeichel by his near post preventing Ounas from getting his second goal of the night.

However, the Foxes did find themselves behind again after 53 minutes when Elmas grabbed his second goal of the night, controlling Giovanni Di Lorenzo’s low cross before giving Schmeichel no chance with his close-range finish.

Immediately at the other end, Di Lorenzo inexplicably passed the ball across his own penalty area where Maddison intercepted before, with the goal at his mercy, letting Napoli off the hook as his shot clipped the outside of a post and went wide.

The frenetic pace slowed a little after that, with Napoli becoming increasingly more comfortable to sit back and allow Leicester more possession. The Foxes were not creating chances with their previous frequency and it was not until the 75th minute that Jamie Vardy riffled a shot into the side-netting.

Five minutes later Dewsbury-Hall slipped at the vital moment as he attempted to round off a lovely Leicester attack.

The Foxes looked like they might be handed a dramatic reprieve in Warsaw when Legia were awarded a penalty deep into injury time. An equaliser would have see Leicester go through despite their defeat, but the spot-kick was saved.