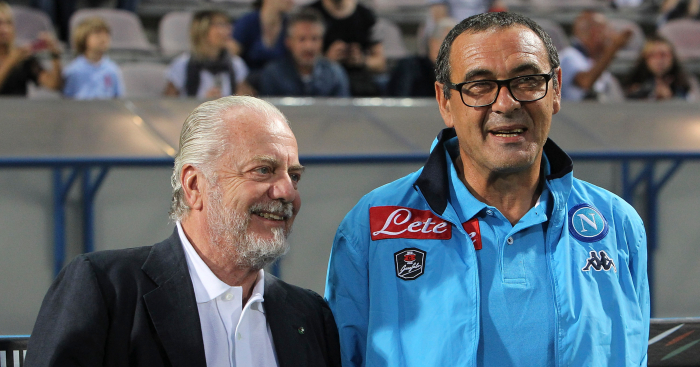 Napoli owner Aurelio De Laurentiis has had yet another pop at Chelsea manager Maurizio Sarri.

Sarri left Napoli in the summer to move to Stamford Bridge, having spent three years in charge of the Serie A club.

He almost delivered a first Scudetto since 1990 as Napoli led Juventus for much of last season before finishing four points behind the eventual champions.

And despite his relative success in Naples, Sarri has seen his management questioned by De Laurentiis, who also accused him of trying to “dismantle” Napoli in the summer.

The club chairman has again taken aim at the Chelsea head coach.

“I thought I had met a coach who would stay at Napoli for a long time,” De Laurentiis said.

“At a certain point it became a question linked exclusively to money.

“Suddenly, it was established by the media that his contract must be adjusted. So what is the value of an agreement just signed? We had already gone from €700,000 to €1.5 million.

“I also once heard him say that for his next contract, he wanted to get rich.

“Sarri’s declarations of love for the city? I believed it, but then I wondered: ‘What if he was using me as a bank?'”

“Ancelotti was a date written in the football universe as if fate had decided it,” he said. “It took five minutes to get an agreement. The quickest negotiation of my fifteen years of football.

“With him, we have a human relationship. We discuss our mutual interests. And if I talk about football, he doesn’t get offended.

“Before the match against Liverpool I called him in the morning. I expressed some opinions, politely, but also with authority.

“He told me: ‘Don’t worry, president, we will win’. I took it as his word and at the 87th-minute thought: ‘Do you want to see what happens?’ And then it happened.”