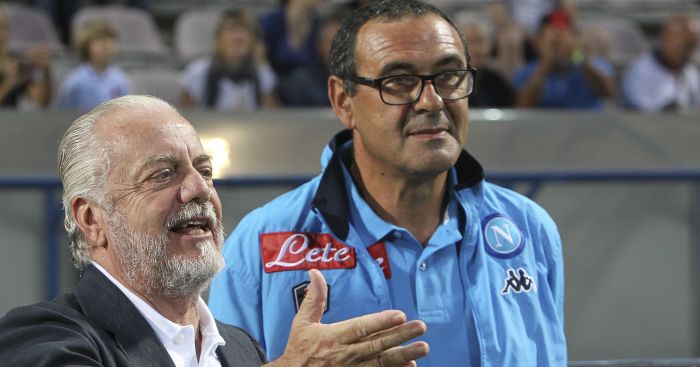 However, he departed the Naples club in the summer to take the hotseat at Stamford Bridge, with Carlo Ancelotti now in charge of the Serie A side.

De Laurentiis – known for being vocal in his assessments of Napoli – has now blasted Sarri for his attitude while at the club.

“Sarri was against all, put the posters on the street, then managed to be loved even by the most extreme fans,” he told Corriere dello Mezzogiorno.

“He is an individualist, one who worked on the fields and on the ground, in the middle of the stones and suffered because he was exonerated after six games.

“Then he had the ride from C to A and when we lost 4-2 against him, I thought he was the right one.

”Sarri seemed a mild person, I discovered that he was too dissatisfied with his past. For a communist, basing everything on money god led to a syndrome of unbearability. I told him, ‘But who do we buy?’, And he said he did not want to know anything about it. I found him out of sight, his wife could not come to the stands.”