Home All The News Nasri brands Vardy ‘a cheat’ after confrontation 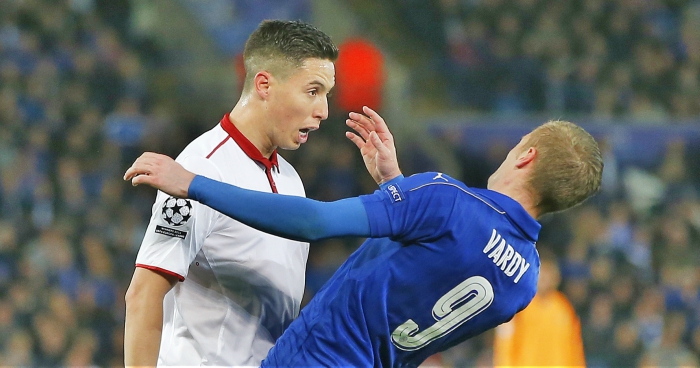 The on-loan Manchester City star was sent off in Sevilla’s 2-0 last 16 second leg defeat on Tuesday, which saw the Foxes reach the quarter finals 3-2 on aggregate.

Nasri and Vardy clashed in the second half and were booked after butting heads – with Nasri dismissed for a second yellow card.

But Nasri has accused the England striker of making the most of the confrontation and believes he conned referee Daniele Orsato into sending him off.

He said: “For me he’s a cheat because if he was a foreign player you, the English press, would be saying he’s a cheat. For me he is a cheat.

“They were winning 2-0, play the game like a man. You are not better than us but you are winning 2-0 and will qualify, just play the game. For an international player you don’t need to do that. Look at the image. Yes he did it, but he did it well.

“He played it well. I thought the English players were tougher than that. He is the one who came to my face.

“I’m surprised but I should have thought about it and not reacted but I’m a man. I see the whole thing, coming out of the Champions League which is a big blow for us. It was just a reaction.

“It was a foul or something and then he pushed me and I said ‘what are you doing?’ and then he came to my face. That’s what happened.”

Sevilla were already 2-0 down on the night after Wes Morgan and Marc Albrighton scored to keep Leicester’s Champions League hopes alive ahead of Friday’s draw for the last eight.

And the France international, who needed to be escorted off the pitch by team-mates, wanted to confront Vardy after the game.

He said: “If I tell the truth I don’t think you will be able to write it. I would love to speak to him (but there are) too many cameras and security and I have to think about next year and not getting a big suspension.”

Vardy refuted Nasri’s allegation, saying: “I’m not a cheat and I never have been. That’s all I’ve got to say on the matter.”

A Leicester spokesman added: “The club refutes entirely any allegation that questions the professional integrity of Jamie or any of its players.”

Press Association Sport understands Nasri will receive an automatic one-match ban for his dismissal, although it could be doubled if a UEFA disciplinary committee decides he failed to leave the pitch in an orderly fashion.