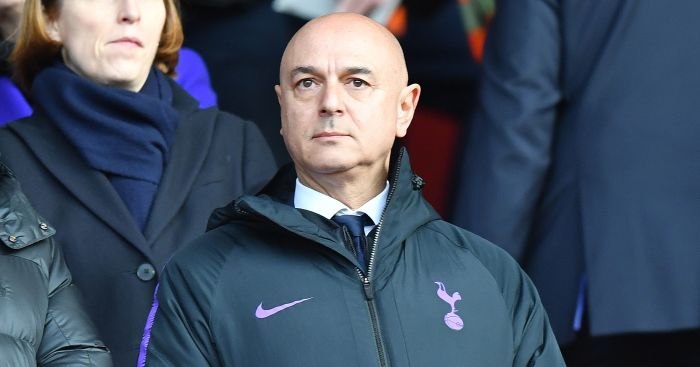 Tottenham are closing in on a club-record move for Lyon midfielder Tanguy Ndombele – unless Manchester United get involved.

Mauricio Pochettino identified Ndombele as his priority signing this summer as he looks to build on their defeat in the Champions League final last month.

There have been various updates on the deal in the past 24 hours, and we have kindly sifted through them to bring you a definitive round-up. You’re bloody welcome.

The fee
There is pretty much widespread agreement here. David Hytner of The Guardian says Tottenham will be ‘shattering their transfer record’ with a fee of €62m (£55.45m) plus €10m (£8.9m) in add-ons. That will almost match Lyon president Jean Michel-Aulas’ valuation of €75m (£66.6m), and represents an increase of €27m (£24.05m) on their reported initial offer. Good old Spurs.

The add-ons
But what are those add-ons? Is this a Manchester United-esque ‘If we win the Premier League, Champions League, World Cup and General Election you can have another £427m’ to boost the numbers? Or have Tottenham sensibly offered some more achievable incentives?

L’Equipe say the bonuses ‘can be reached because they depend in particular on qualifications in the Champions League’. Considering this past season’s finalists last failed to qualify for Europe’s premier competition in 2014/15, thus in just one of Pochettino’s five seasons, that’s probably a safe bet.

The personal terms
Here is where L’Equipe present a potential obstacle. They suggest that the deal is far from done, with an agreement over the fee only half the battle. Ndombele has yet to agree personal terms, with ‘elements’ of the contract expected to take ‘several meetings’ to finalise.

The French newspaper does say the midfielder has been ‘convinced’ by Pochettino and that negotiations could be completed ‘in the next few hours’. It is also stated that delays over such considerable transfers are hardly rare, as contracts of this magnitude are not straightforward. And with the London Evening Standard claiming Ndombele will ‘become one of the club’s highest-paid players’ with a substantial increase on his current ‘£50,000-£60,000-a-week’ wage, it will inevitably take time.

The Guardian say that the player was ‘greatly impressed’ by his recent visit to Tottenham’s training ground. He believes ‘the next phase of his career will be best served in north London’.

Interest from elsewhere
Which brings us neatly to news of late interest from Manchester United. Their name has been thrown into the mix by L’Equipe, who say a ‘surprise’ move could be in the offing. But they are still ‘stuck’ on Paul Pogba’s situation, and the French newspaper seem to have introduced them into the conversation for no real reason.

That sense is reinforced by The Guardian, who say Tottenham ‘are firmly in the driving seat’.

PSG and Juventus were both linked with Ndombele at various points throughout the year, but L’Equipe explain why neither are in the running. The former have other priorities, while the latter are happy enough concluding a deal for free agent Adrien Rabiot.