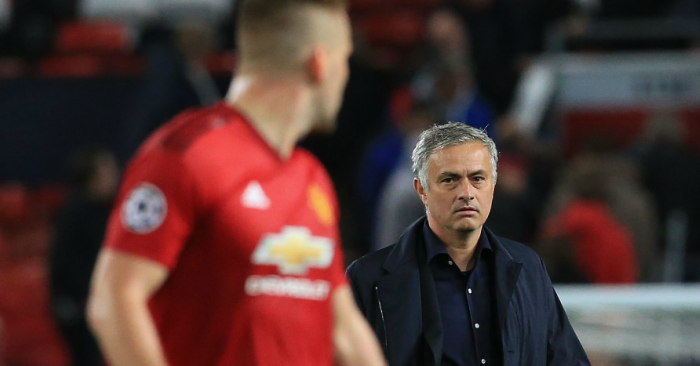 There was the moment when Eric Bailly chested the ball down just inside Valencia’s half, set himself to shoot, and unleashed a half-volley that was almost as close to the corner flag as Neto’s goal.

There was the moment when Romelu Lukaku looked to burst down the right-hand side; the Belgian stopped in his tracks only when Alexis Sanchez decided to dispossess him and continue the attack himself; it promptly broke down.

There was a catalogue of moments when Goncalo Guedes really ought to have exploited a defence with more obvious gaps than gender pay in 2018, with Manchester United fortunate to face a side that have drawn five of their first seven league games this season for a reason.

Over the course of 90 minutes against Valencia, there was no shortage of moments when the hosts looked like a collection of individuals playing together for the first time. There were periods of clarity when Marcus Rashford threatened and Luke Shaw stood firm. But this is now the office five-a-side team where all of the original players have been replaced as regulars by friends of acquaintances. All sense of togetherness has been lost, every bond broken. These are strangers simply wearing the same colour shirt, trying to work out everyone’s name and who invited them. In every sense, they are no longer United.

It speaks volumes that Jose Mourinho can now seemingly no longer name a starting XI containing fewer than five or six players he has fallen out with either previously or currently. Alongside Bailly and Shaw on Tuesday were club captain Antonio Valencia, former deputy Paul Pogba, the ineffective Alexis Sanchez and the promising Rashford. While most managers look to piece together a solid spine to build a first team around, Mourinho has managed to assemble one with fractures running straight through it. A drab 0-0 draw at home to an average side is the inevitable result.

Had Rashford’s late free-kick been an inch or two lower, had Pogba connected better with his gilt-edged second-half chance, or had Lukaku converted his header when unmarked, United would have had the points they desired. But this was the performance they dreaded, and a 1-0 victory would have served only to mask problems that are growing by the game.

It was both an encouraging and difficult start for Valencia, the club making light of the player’s complete inability to defend capably. Guedes, Jose Luis Gaya and Michy Batshuayi were constant thorns in the Ecuadorean’s right-hand side, and only a complete and utter lack of end product spared his and United’s blushes.

Save for a positive start and a sudden burst of initiative just after the hour mark, United themselves were insipid. They failed to complete even the basic tasks properly, misplacing passes, mistiming tackles and miscuing shots. It was rather fitting that Rashford and Guedes were their respective sides’ biggest threats by far. They both had six shots; they both had just one shot on target.

United were even late to their own potential funeral, having to request that kick-off be delayed as the squad arrived at Old Trafford later than expected. The puns about Mourinho busying himself with either parking the team bus or throwing his players under it really do write themselves.

It was difficult not to shake off the sense that this was simply the latest leg in his farewell tour both with United and as an elite manager, for he will surely not land such a desirable job again if this rut continues.

It all started with last weekend’s defeat to the man he has been disparagingly calling ‘Mr. Pellegrino’ since replacing him as Real Madrid manager. After Valencia – the team he has now faced the most times without ever losing to (11) – comes Newcastle, and a battle with old foe Rafael Benitez; a visit to Stamford Bridge; a clash with ole friend and foe Cristiano Ronaldo; and a meeting of the minds with one of his many successors, Marco Silva of Everton. His greatest hits then has a brief intermission at Bournemouth, before the encore of Juventus and Manchester City before November’s international break. By then, it might all be over.

And that really is the only outcome that seems possible right now. United might improve, and Mourinho might turn things around, but these are predictions now born more out of hope than expectation. The Portuguese has never had to race into a burning building, rescue everyone then help build it again from the ground up. He has only ever been found walking away from the scene of the crime, carrying canisters of gasoline, wiping sweat from his brow and pointing the finger of blame in every other direction. Mourinho is a firestarter; United may soon need a firefighter.

This is a side and a manager trapped in a toxic relationship. The former will never end it out of some misplaced sense of pride, a belief that their values are any different to those of any other football club. The latter will never walk away due to his own ego and self-worth. Both will convince themselves the other might change one day. But this is damaging Manchester United as much as it is Jose Mourinho, and neither have the balls to end it before it is too late.