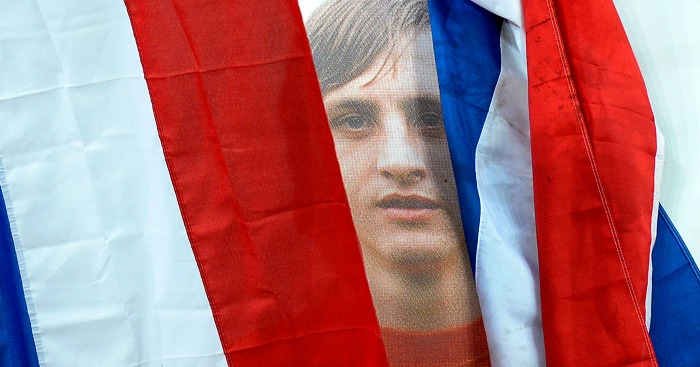 An emotional tribute to Johan Cruyff on Friday night saw play stopped in Holland’s friendly against France for a minute’s applause at a stadium that could soon be renamed in his honour.

As had been planned, the action at the Amsterdam ArenA was temporarily halted by the referee in the 14th minute as a mark of respect for Dutch great Cruyff.

The 22 players on the pitch – all wearing black armbands – then joined in as rapturous applause rang around the ground.

Cruyff, who wore the number 14 shirt for his country and led them as captain to the 1974 World Cup final, died on Thursday at the age of 68 after losing his battle with lung cancer.

An image of his face appeared on the stadium’s big screen during the applause, while a huge banner in one stand showed a picture of him in his famous orange ’14’ jersey, and another hanging up simply read “Johan Thanks”.

Dutch football association (KNVB) president Michael van Praag had previously said: ”I can’t wait for the moment when we rename our stadium the Johan Cruyff Arena. It’s the best tribute we can pay him.”

No official decision has been made, however, on the stadium’s name.

Cruyff’s son Jordi on Friday said he the family was ”touched” by tributes to his father.

In a message posted on his father’s official website, worldofjohancruyff.com, Jordi wrote: ”On behalf of my mother, sisters and the rest of the family I would like to say thank you for all the love, kind words and memories that have been shared with us.

”It has touched us deeply that Johan was such an inspiration to many of you.”

The family’s management confirmed they were making arrangements for a “private farewell” to Cruyff, as well as preparing details for an official memorial.

Jordi also posted a message, accompanied by images of his father, on Twitter during the Holland-France game, which finished 3-2 to the visitors.

The message said: “A husband, a father, a grandfather. We will miss you like crazy, it will be hard but I hope we will make you proud.”