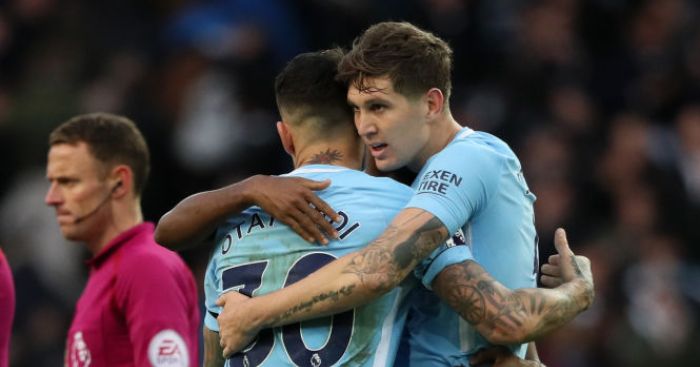 The Manchester City pair were exposed time and again during the defeat to Norwich, with Aymeric Laporte’s injury-enforced absence creating quite the problem for Pep Guardiola.

Carragher feels that Otamendi has never been of the requisite standard at the Etihad, while Neville believes Guardiola “gave up on this partnership” when Laporte joined.

“He dives in, he has done it all his career,” Carragher told Sky Sports of Otamendi.

“He will never change and that’s why he’s not good enough to play for Manchester City. I have never believed it from day one and nothing I have seen in the last four or five years has changed my mind.

“John Stones, in some ways, over the next three or four months, is almost fighting for his Manchester City career in that, if it doesn’t go well for him they are going to buy someone.

“I think what City have now in terms of centre-backs is what I call big brother and little brother.

“Now at Liverpool, Virgil van Dijk is the big brother and Joel Matip is the little brother. Matip without Van Dijk does not look the same. With Van Dijk, he’s calm and he’s confident with the big fella next to him. It’s like when your ma lets you go to the shops with your big brother, you’re OK, you’re safe.

“At this moment, I don’t think Guardiola wants to put those two on the pitch together but he has got no option because he has not gone big in the summer.”

Neville was in agreement.

“Guardiola gave up on this partnership 18 months ago when Laporte came to the club,” he said.

“Otamendi always gets caught out as a centre-back and quickens up the opposition in attack. He’s so not a Pep Guardiola type centre-back, they’re usually composed but he’s rash.

“Sir Alex Ferguson at times during his Manchester United career would see a game too far with players and say, ‘that’s it, you’re done’. Manchester City’s 4-3 defeat at Liverpool in 2018 was the game when Guardiola decided that Stones and Otamendi couldn’t play together.

“Laporte’s injury, Kompany leaving and not replacing him is a big problem for Manchester City. Stones and Otamendi have played 25 games under Guardiola in the Premier League.

“That will cost Manchester City the Premier League title. If these two play together at their current rate of performance they won’t win the league.”