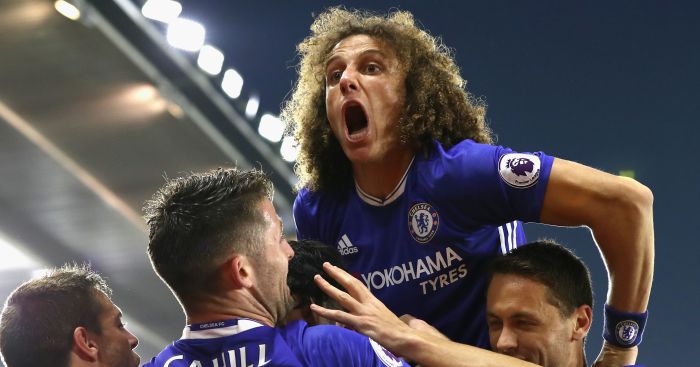 Gary Neville has been impressed with David Luiz’s maturity this season after once describing the Chelsea defender as like a player being controlled by a 10-year-old on a Playstation.

Following a little bit of a shaky start under Antonio Conte, the Blues have found their rhythm in his new 3-4-3 system and Luiz seems to have particularly thrived as part of a back three.

Chelsea now find themselves second in the Premier League table and only trail leaders Liverpool by a single point going into the weekend’s fixtures.

And Neville has had to rethink his stance on Luiz after the Brazilian has turned in a number of solid performances at the back for Conte’s side.

“The three at the back suits David Luiz perfectly,” Neville told the Metro. “He doesn’t suit playing in a back four. But I think playing in a three, particularly with N’Golo Kante and Nemanja Matic playing in front of him, and he seems to be making good decisions.

Gary Neville says "it's embarrassing" that Wayne Rooney had to apologise over his drunken behaviour https://t.co/R7SVobr4gC

“I think also Conte is a very good, well drilled defensive coach. So ultimately at the moment I think it looks very good. I think having Kante and Matic in front of him and having the two players either side is giving him a good platform to show his best.”

Neville thinks Luiz’s form could be a good thing for club captain John Terry as he can now concentrate on playing a supporting role.

“At John Terry’s age he can relax about not being in the team. He’s climbed the mountain of football really with what he’s done. He can now provide good support to that team,” Neville added.