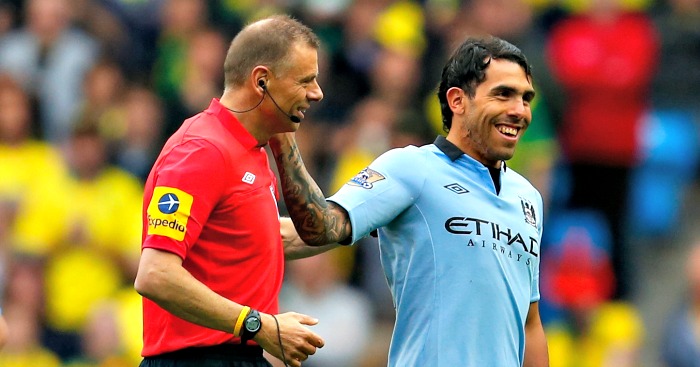 Former Premier League referee Mark Halsey has claimed that he was told to say he had not seen controversial incidents during matches by the refereeing body.

Halsey’s comments came in the aftermath of Sergio Aguero’s three-match ban administered by the FA, with the Manchester City striker now set to miss the Manchester derby.

According to the Daily Mirror, ‘Manchester City were understood to be appealing the ban because TV images showed referee Andre Marriner was close to the incident and appeared to be looking clearly at Aguero’s tussle with West Ham defender Winston Reid’.

But Halsey, who retired from the game at the end of the 2012/13 season, has made the shocking admission that he had previously been told by the PGMOL – the Professional Game Match Officials Board – to say he had not seen controversial incidents, although he clearly had.

‘I have been in that situation,’ he wrote on Twitter, ‘when I have seen an incident and been told to say I haven’t seen it.’

When pressed further on his comments, the 55-year-old added: ‘To be fair to the FA… it’s not them. It comes from within the PGMOL.’

Mark is that not corrupt!! I'd like to know who told you to say that!!! https://t.co/IC2KmsexF7