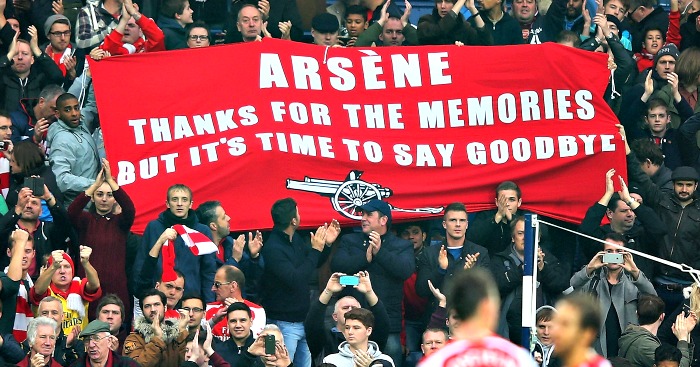 Gary Neville has laid into Arsenal fans for their recent treatment of manager Arsene Wenger.

Wenger watched from the stands as his Gunners side were beaten soundly by Chelsea on Saturday.

It leaves them fourth in the Premier League table, 12 points behind the current leaders, and facing a battle to finish in the top four.

Arsenal supporters have once again made their thoughts known in the aftermath of the result, with many calling for Wenger’s sacking, including the ridiculous ArsenalFanTV, which is just terrible.

“I walked out of the Chelsea ground yesterday and there were the Arsenal Fan TV cameras everywhere,” Neville told Sky Sports.

“To be honest with you it was embarrassing listening to it and watching it.

“I was watching Chelsea fans taking the mickey out of them, which was a little bit funny.

“I was watching Arsenal fans slating and slanging into him, and I thought, ‘he doesn’t deserve that’.

Guys like @GNev2 are so out of touch with real fans who follow their club every week. Their voices are now being heard so GET USED TO IT

“He’s done an unbelievable job. If he was to announce his retirement at the end of the season tomorrow everybody would plough in with tributes.

Neville also blasted one Arsenal fan in particular, who unveiled a banner calling for Wenger’s sacking during the Chelsea defeat.

“Obviously the Arsenal fans are disappointed, but to pre-empt by bring a banner into the ground, it’s a joke,” said the Sky Sports pundit.

“Remember, the consistency of finishing in the top four might not be acceptable for Arsenal fans, but the alternative might be that you finish below those positions.

“Think about changing your manager, it might be that you don’t finish in the top four for a few seasons, and actually what Arsene Wenger has achieved is fantastic. So, be careful.”