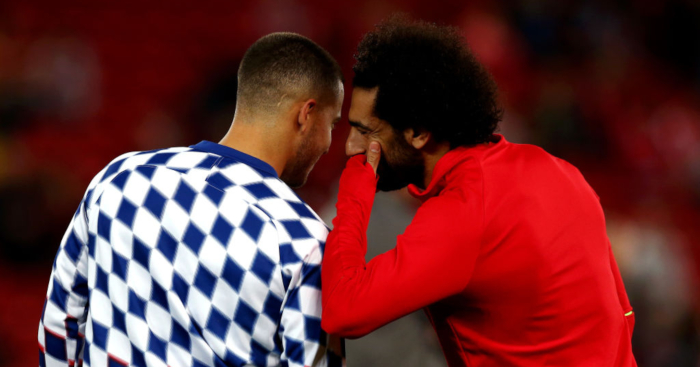 Gary Neville believes “we have to show some humility as to what we’re actually witnessing” with the “outstanding” level of Premier League wingers.

Neville feels that wide players have taken on a greater prominence in recent years, culminating in an unprecedented standard being set.

Neville feels that “we have to show some humility as to what we’re actually witnessing” with their attacking output.

“I think we sometimes sit here and talk about the Premier League in the mid-2000s as being in its peak. We have to show some humility as to what we’re actually witnessing with Sterling, Sane, Hazard, Sadio and Salah.

“It’s the impact of Ronaldo and Messi. They’re looking at them now, in football terms, they are killers.

“I played against wingers that were lovely wingers, they could beat a man and they scored eight to 12 goals a season, they had the odd good season.

“These are 20 goals, 25 goals a season wide players, wide forwards.

“You’d normally get confronted two or three times a half in a game 15, 20 years ago. You could be aggressive against people, attack them from behind, you could really chop them, I hate to say.

“For a full-back now, it’s so much more difficult. So this idea that full-backs can’t defend, it’s a nonsense.

“These lads play in the perfect positions, on the shoulder, high up the pitch. Wingers used to go deep and set up play with the full-back, your fullback would get it, your winger was told to go deep, set up play, play it back in.

“These lads now are on the last line of defence, making the runs that hurt you in behind all the time.

“The more I see the wingers they’ve got, City and Liverpool, the positions, speed, intelligence, toughness and strength, I wouldn’t want to play them at all.

“They’re the most devastating when it comes to goals scored. I used to think if a wide player got a chance he wouldn’t always take it, but these are finishers, these are goalscorers, so for me, the game’s changed a lot in the last ten years.

“Wide players are not wingers anymore, more often than not they’re wide forwards, three attackers, although City, their wide players do play as wingers when they’re on the ball, but what we are seeing is absolutely devastating.

“I think Salah, Mane, Sterling, Sane, you could probably add Bernardo Silva to that from a Barcelona point of view, you could probably take those five into a pot, and Barcelona and Real Madrid, who have always plucked the best players from our country, would take every single one of them tomorrow, because they’re outstanding.”