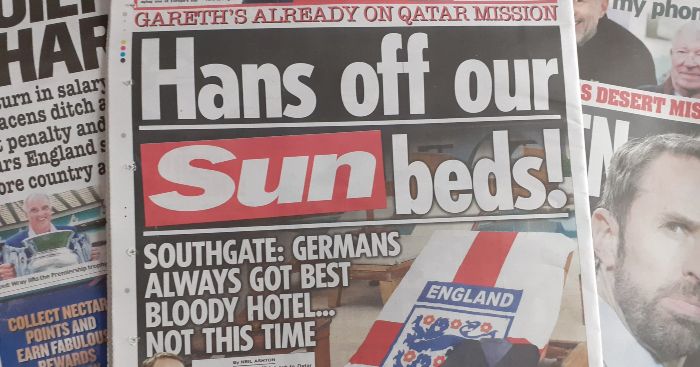 Hans free
If that back-page headline on the nation’s best-selling newspaper is not quite jingoistic enough for you, try out Neil Ashton’s first paragraph for size:

‘GARETH SOUTHGATE will jet out to Qatar on a World Cup recce next month – to stop the Germans nicking the best hotel.’

It’s a wonder Brexit ever became a thing.

Amount of times Mediawatch died inside while reading that ‘Hans off’ headline: So, so many.

Wood you rather?
It’s only when you open The Sun – and we do it so you don’t have to – that you get the delight of Mason Greenwood’s ‘first-ever Press interview’ with Tom Barclay.

There they are, still capitalising ‘Press’ for no apparent reason.

The online headline for the story offers a mere taste of what is to come:

‘Greenwood wants to emulate Rooney for Man Utd and England.. even though he’s NEVER met him’

Well that is just plain madness. Mediawatch makes a point of only ever wanting to emulate people we have met. How can you possibly wish to follow in the footsteps of someone you don’t even know?! Preposterous.

And to the first paragraph:

‘MASON GREENWOOD wants to be just like his goal hero Wayne Rooney – even though the pair have never met!’

‘Manchester United’s 18-year-old whizkid amazingly never bumped into the strike legend despite a whole decade at the club together.’

Now hold the damn phone. You mean to say that 18-year-old Mason Greenwood ‘never bumped into’ 34-year-old Wayne Rooney despite them spending ‘a whole decade at the club together’? It’s as if the former was an actual child for most of those ten years, and was still in the youth team until a year after the latter had even left.

It’s not particularly ‘amazing’ that they never crossed paths.

Over to you, Mason.

“Wayne Rooney and the Brazilian Ronaldo have always stood out for me. I’ve always looked up to them.”

Pop idol
The Daily Mirror – ‘Greenwood names Rooney as his Man Utd idol – despite never meeting him’ – are also new to the concept of having public role models to aspire to.

Mount doom
Speaking of Masons, Stan Collymore is here to give Chelsea’s Mount some sage advice in the Daily Mirror:

‘When the spotlight shines on you at this age it is easy to listen to everything everybody says.’

Cue Collymore imploring Mount to listen to everything he says.

‘And, undoubtedly, some voices in the media or on social media will be telling him, ‘James Maddison is a better passer of the ball than you, so you need to work on that.’

1) You have literally never been on Twitter if you think that’s how conversations are conducted on there. @FilthyFirmino is rather less diplomatic.

2) Is anyone – literally anyone – saying anything close to that?

‘Unfortunately, that sort of chat just confuses players, it hinders rather than helps their development because they end up wanting to be all things to all men.’

This sort of chat has just confused Mediawatch. What a strange straw man argument.

‘So the key message to Mount is not to get confused and to just keep improving.’

It’s a wonder Stan never ventured into coaching with pearls of wisdom like that.

‘The day after I knocked out Alf-Inge Haaland in a training-ground fight, I walked back into the dressing room to be greeted by Stuart Pearce and the lads singing the Rocky theme.

‘I mention this because people will think life will be all dark and sullen for Raheem Sterling after his bust-up with Joe Gomez.’

It was more than a week ago. Move on. And you mention this because you wanted to remind everyone you won a training-ground fight.

She said
Finally, Collymore implores England to find a Plan B, as without one ‘we will go to the Euros and dish out a couple of hammerings but when we get up against a decent side it will be the World Cup and Croatia all over again.’

It really was dreadful reaching the semi-finals, taking an early lead and only losing in extra-time, wasn’t it?

Shear lunacy
‘Shearer names his team of the season so far with four Liverpool stars – but none from Man Utd or Arsenal’ – Daily Mirror.

Shearer picks XI comprised entirely of players at clubs from 1st to 5th – and ignores those who have not been good enough – Mediawatch.

MEN in black
It is only Tuesday in the latest international break, and the Manchester Evening News have actually lost their collective mind.

The prosecution presents the following, from their LIVE transfer blog:

‘EYE! In ‘The Sun’ they already see a United without Pogba and with Bale in January.

‘El Chiringuito view this as near-certain confirmation Pogba will be swapping Manchester for Madrid in the New Year. The Sun’s ‘how they could look’ formula is perfectly legitimate and something arguably pioneered by the MEN in recent years. Such pieces spark debate, depending on how realistic or fantastical they might be.

‘For El Chringuito, the aforementioned graphic means so much more because they need their Pogba-Madrid fix. The Spanish outlet claimed in August Pogba had refused to travel to Norway and Wales for United’s final friendlies yet there he was in the midfield for the first game of the season. United have sugar-coated their Pogba briefs but the general consensus is his professionalism has, indeed, been impeccable.

‘That Pogba will probably end up in Spain eventually is besides the point. Sell him in January and that wheel Solskjaer is at would be careering off the edge of a cliff.’

That will be the MEN claiming credit for…pure fantasy. And something people have been doing on Football Manager and FIFA for decades. Well done, them.

Recommended reading of the day
David Harding tests the boundaries of morbid curiosity with Keys and Gray. (£)