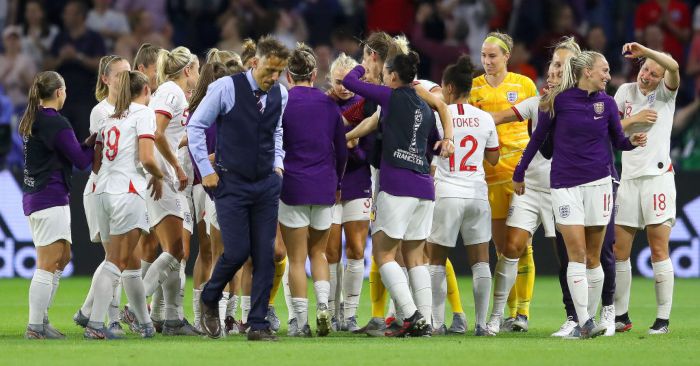 England coach Phil Neville insists he and the team are having the “time of our lives” after reaching the semi-finals of the Women’s World Cup.

Norway were swept aside in a comfortable 3-0 victory courtesy of goals from Jill Scott, Ellen White and Lucy Bronze and they could even afford a missed penalty by Nikita Parris.

“We expected nothing else and that’s not being arrogant. I thought it should have been four or five,” Neville told BBC One.

“That is the level of performance we have been showing. We are having the time of our lives. We are just where we want to be.”

Neville also heaped praise on Bronze, who scored a brilliant third from a free-kick move and was generally excellent all night.

“What you have seen tonight is that Lucy Bronze is the best player in the world: there is no player like her in the world, no player who has her athleticism and quality,” he added.

“I played full-back but never to that level she played at.

“She is the best player in the world. She should win the Ballon d’Or, 100 per cent. I have no doubt about that.

“What you saw tonight was a player playing at the top of her game, and that is her level of performance. The bigger stage, the bigger the performance.

“Her quality for the first goal, the strike for the third. She is phenomenal and someone for me who doesn’t get the recognition worldwide that she deserves.

“For me, if you were saying about a Ballon d’Or winner this year, Lucy Bronze has got to win it. I’ve said that for six months. Just because she plays at right-back… she is the best. There is nobody like her.”

Neville is confident his side can maintain their momentum as they head to Lyon for a semi-final against either hosts France or the United States next week.

“We are not bothered who we play,” added Neville.

“We will just go to Lyon, the atmosphere and occasion will be incredible, and my players have proved tonight the bigger the occasion the better they are.”

A trip to Lyon means a return to the city where Bronze plays her club football for the Champions League winners.

“I’ve been dreaming of getting to Lyon and playing in that semi-final,” she told BBC One.

“I’m excited to be going to Lyon now. We know USA or France will be a top team and we will have to raise our game to another level.”