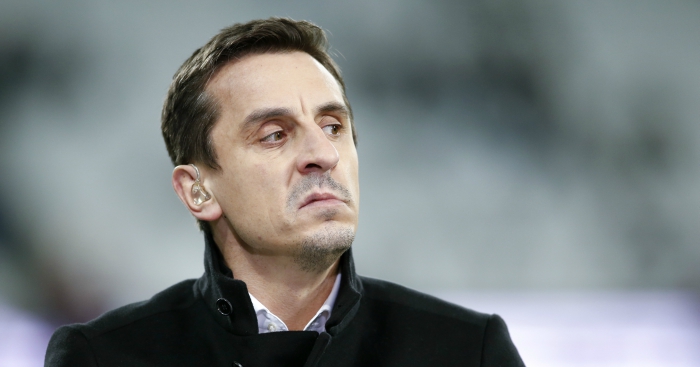 Speaking at a Digital, Culture, Media and Sport (DCMS) committee hearing on the Football Association’s plan to sell the national stadium, Neville described the proposed dividend for grassroots football as “nonsense and absolutely ridiculous”.

“I despair at the thought that the FA board and management are sitting there and thinking that they have to sell Wembley to fund grassroots football,” the 43-year-old said.

American billionaire Shahid Khan offered £600million in cash for Wembley in April and said the Football Association can retain some of the hospitality income from the stadium, a source of revenue that would bring the total deal to £850-900million.

Khan, who also owns the Premier League’s Fulham, wants to move his National Football League team the Jacksonville Jaguars to the iconic venue, which cost more than £750million of FA and public money to build.

The FA’s board has announced this was not Khan’s first offer but it was the first of sufficient value for it to recommend, with the rationale being that it would give the national governing body a windfall it can invest in grassroots football.

The FA has claimed that the deal would enable it to invest an extra £70million a year – and a total of more than £2billion over the next 20 years – in artificial pitches, grass pitches, coaching and other initiatives. This would help it tackle the unacceptable state of grassroots facilities – just one in three grass pitches are of adequate quality, one in six amateur games cancelled because of poor pitches and only half the number of modern artificial pitches as Germany.

Neville told the panel he agreed with the FA that something must be done to improve facilities at the bottom of the pyramid but said selling the national stadium was not the way to do it.

He called on government to “intervene and reset” the 1992 deal that saw the top clubs break away from the Football League to set up the Premier League.

He pointed out that £70million could be raised by a 25 per cent levy on agents’ fees – more than £450million over the last two years – or taking £3.5million in prize money from each of the Premier League clubs, a sum he suggested they would not miss.

But he also said £70million is a “pittance…it should be £370million” and that investment should come as part of a proper partnership between football and government so that “every school and village” could have a modern artificial pitch and access to good coaching.

Neville, who now co-owns non-league Salford City and is a leading television pundit, said: “This is a short-term play, what happens when the £500million runs out?

“The FA is working with their hands tied behind their backs. The government must intervene so we can protect grassroots football and explore some creative, innovative ways of doing this properly. Selling Wembley is the answer now but what’s next? St George’s Park?

“And instinctively I would just worry about a multibillionaire knocking on my door and making an offer – what does he know that I don’t? I feel a bit uncomfortable about that.

“The FA will have paid off the Wembley debt in a few years (by 2024). I think we could look back on this deal in 30 years’ time and wonder what we’ve done.”

Sitting alongside Neville during the first half of the committee’s hearing on the proposed Wembley sale was co-chair of the Tottenham Hotspur Supporters’ Trust Katrina Law, one of two fans’ representatives on the FA council.

Law explained that polling conducted by the Football Supporters’ Federation revealed that fans were divided on the sale, with one third being strongly opposed, one third being in favour and one third wanting to know more details about the grassroots investment and what guarantees the FA will gain from Khan.

“There is a significant number in the fan community who have an emotional attachment to the stadium as a national landmark, the shop window of our game and the home of the oldest national governing body in the world. They worry about our sport playing second fiddle to American football,” said Law.

She added she was not personally against the idea of selling Wembley but was concerned Khan was getting the stadium on the cheap and wanted a lot more detail on how the FA’s grassroots investment fund would work.

Neville added that he was not saying the FA should never consider selling Wembley, he just believes it should be a “last resort but if we ever get to that point we are in a seriously bad position”.