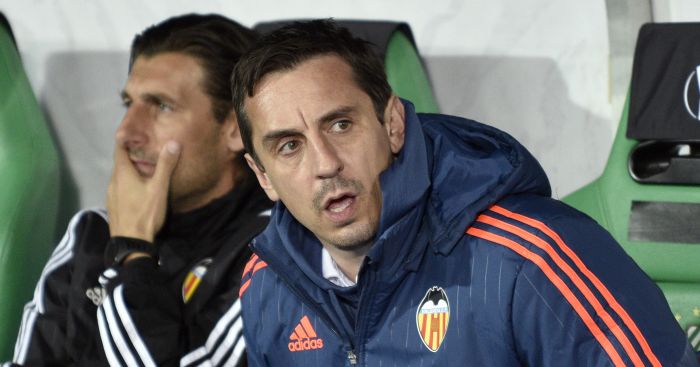 Former Valencia president Paco Roig has branded Gary Neville “the worst coach I have ever seen” in a foul-mouthed rant.

Neville was sacked from his first managerial post at Valencia in March 2016 after less than four months in charge.

The Manchester United legend lost 11 of his 28 games in charge, and has since admitted that he may never go into management again.

The Sky Sports pundit was the subject of former Valencia owner Roig’s ire in an interview on Friday.

“What does the owner know about football?” he asked, of Peter Lim, the man who appointed Neville. “The pundit who came, the Englishman, was the worst coach I have ever seen.”

“Pitarch says nothing but nonsense and has bought f***ing sh*t players,” he said.

“What has Pitarch done to deserve leading Spain’s third biggest club? I’ve had it up to my balls with all these lies.

“Garcia Pitarch says that he has said that he is leaving and that they will not let him go…let him go!”

Roig then took aim at striker Rodrigo, who has scored six goals in 38 games since joining for £25m.