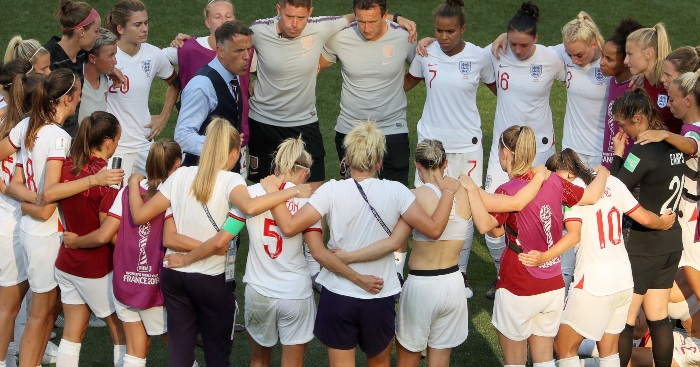 Phil Neville has every intention of seeing out the remaining two years of his contract as England Women boss, saying he “can’t think of a better job in football” at the moment.

Neville was appointed to the role in January 2018 on a deal running through to the 2021 European Championships, which will be held in England.

He has subsequently guided the Lionesses to victory in the four-team SheBelieves Cup for the first time earlier this year and now the semi-finals of this summer’s World Cup in France.

Earlier this week the Football Association’s head of women’s football Baroness Sue Campbell said the 42-year-old, who had already said he would manage Great Britain’s team at the 2020 Tokyo Olympics, had “signed up to a three-year journey and he seems committed to it”.

And Neville has now emphasised that, as long as he continues to have the backing of the FA, the organisation is happy with him and his “players are listening to my messages”, he will be staying on for the next two years at least.

“I think the last 18 months have given me things that no other job could have given me and this World Cup has been everything and more of what I expected,” Neville said.

“You read and listen to stories, and people say, ‘What’s the next move’, but I can’t think of a better job in football. I get an organisation that backs me, anything I want. I get a set of players that play to my tune and I’ve got scope to improve, to make an impact on people’s lives.

“I’m committed to the three-year project. I don’t see another job that would give me what I’m in now. As long as the FA back me the way they’ve backed me, and the players show the same kind of thirst for learning, then I’ll be here for the three years.

“I’m the type of person that, if the players get bored of my ideas, if they stop listening, then I will say, ‘Thank you very much, you’ve given me the best time of my life’, and I’ll empty my office and walk away. But at this moment in time, I’ve got a set of players that are hungry.

“As long as my players are listening to my messages, that’s the biggest thing, and the FA back me in everything I do and I can see progression and ambition, then I love my job.”