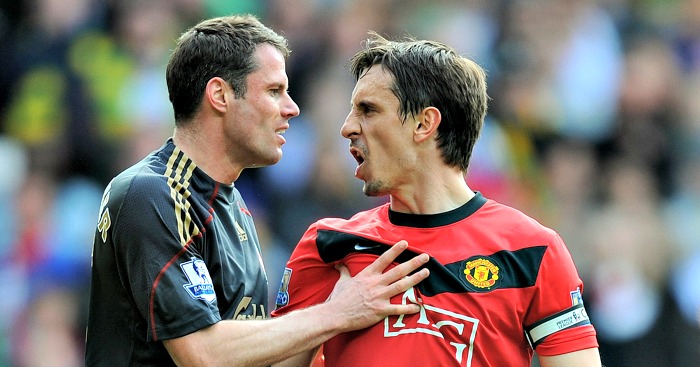 Liverpool returned to the top of the Premier League with a hard-fought 2-1 win over Tottenham at Anfield on Sunday.

The Reds are two points above Manchester City, who have a game in hand on their title rivals.

But while Carragher feels Tottenham were Liverpool’s “toughest game on paper,” Neville picked out three of their remaining six games that could pose bigger problems.

Oh no. It's like Red Monday all over again. This is why Sky Sports can't be trusted with nice things. pic.twitter.com/Hb7jjKM51u

“I don’t think today is the toughest game for Liverpool,” he said on the Gary Neville Podcast.

“I think Southampton away, Cardiff away, even Newcastle away, could provide tougher and sterner opposition.

“It’s those games that can sometimes freak you out a bit, especially as a couple of those teams are in relegation battles.

“We are at Southampton on Friday and Liverpool will start as favourites, but those games can be tougher than this type of game, when everybody is up for it, the fans, the players, and it’s an obvious difficult opponent.

“I don’t see Tottenham and Chelsea at home as the games that will catch Liverpool out. If they are going to have a problem I think it will be those away games.

“I also think City have an advantage in the next four games as they play in front of Liverpool. I think it’s always an advantage to play first so they can get the points on the board and put pressure on.”

But Carragher, who refused to apologise for his on-air reaction because “I’m a massive Liverpool fan and I’m desperate for them to win the league,” disagreed.

“I think for Liverpool, they probably have the toughest game on paper out of the way, and if they get past Southampton and Chelsea and are in the same position, that’s when City’s tough run comes,” he said.

“But don’t worry about City if you are Liverpool and vice versa.

“Both teams go about it in different ways. Liverpool probably aren’t going to win too many games 4-0 or 5-0 while City, when they are on form, will win by three or four.”