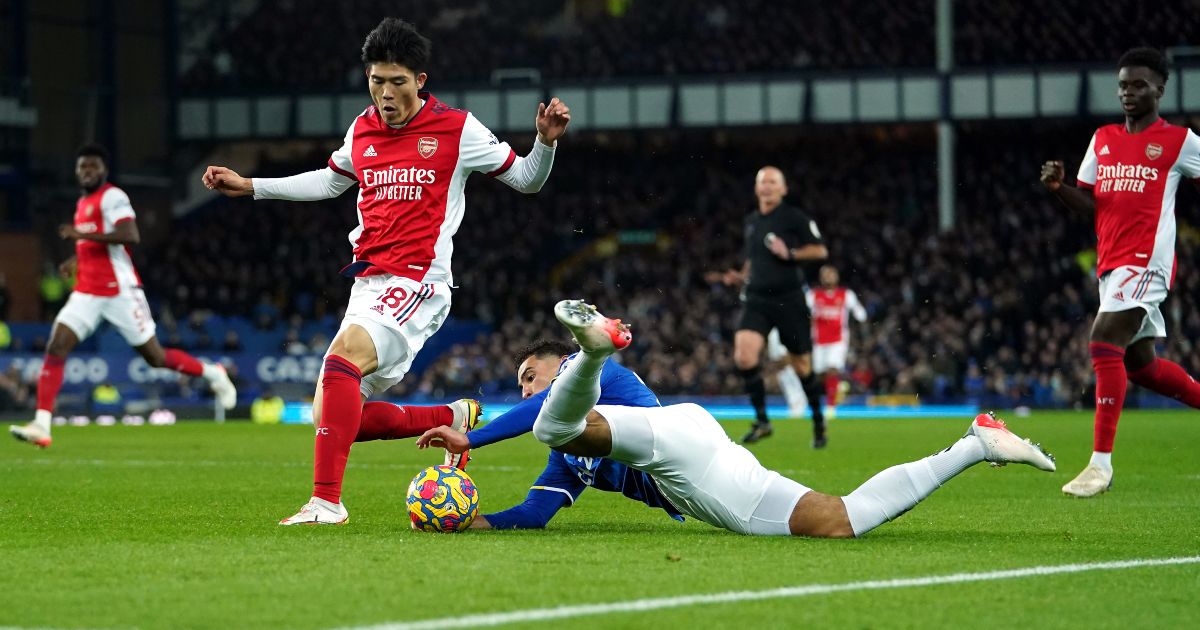 Gary Neville and Jamie Carragher were in agreement that Everton defender Ben Godfrey was lucky to not get sent off against Arsenal on Monday night.

Everton eventually won the match 2-1 thanks to a late strike from Demarai Gray after Richarlison had cancelled out Martin Odegaard’s first-half strike.

A VAR check was undertaken after Godfrey’s boot caught Arsenal defender Takehiro Tomiyasu in the face, with the verdict being no action against the England defender.

And Neville could see why VAR didn’t overturn the on-pitch decision but insists it should’ve  been a sending off for the Everton defender.

“You’re talking to two of the masters of following through into the face and making it look like it’s accidental,” Neville said on Sky Sports.

“We think he definitely means that. He realises what he’s done and he goes ‘oh look it’s an accident’.

“As a professional, definitely 100 per cent he means that however I can see why VAR have said it’s accidental and we couldn’t prove it. But as a professional you know.

Carragher, who was stood next to Neville, added: “He’s a very lucky boy.”

Meanwhile, Everton manager Rafa Benitez hailed it as a “perfect” night that saw them win their first match in nine Premier League outings.

Benitez said in his post-match press conference: “I think we saw character in the first games (of the season) and today it was even better, in terms of two goals disallowed and the reaction of the team, the fans behind the team, everybody delighted at the end because of the great goal Demarai scored, and three points after that bad run.

“So I think everything was, you can say, perfect, no? In terms of the players, the fans, the performance and the final score.”

On the Everton fans, Benitez added: “I think since I came here, from day one the fans have been really good.

“The frustration of the fans in some games, it’s because obviously they want to see the team winning. But nobody can complain about the commitment, the desire, the effort of the players.

“We can complain about decisions in the final third or mistakes, but not about the commitment. Today I think the fans could appreciate that from the first minute.

“So I think they stick with the team, and today is another proof we are together, we are stronger, and that is what we have to do until the end of the season.”