Home All The News Neville ‘completely ashamed’ of ‘unacceptable’ Cameroon 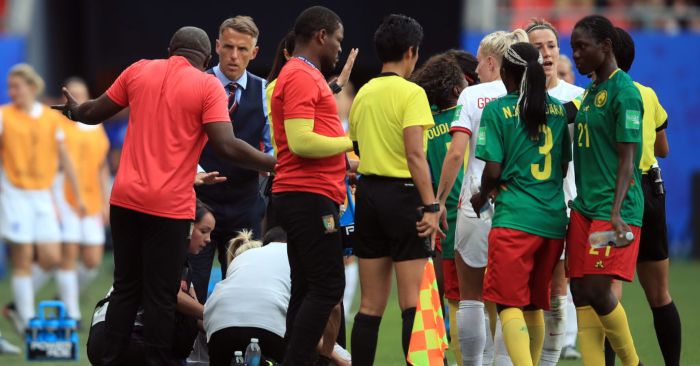 After Steph Houghton’s 14th-minute opener, Cameroon twice reacted to VAR decisions that went against them by remonstrating with the officials at length and appearing as if they may not continue playing.

The first occasion came in first-half stoppage time when Ellen White’s finish, initially ruled out for offside, was given as a goal.

And the second was shortly after the break, involving another offside call, as Ajara Nchout’s strike was disallowed.

Alex Greenwood subsequently fired in England’s third just before the hour mark in a contest that also saw them receive some rough treatment from their opponents, while Toni Duggan’s arm was spat on by Cameroon’s Augustine Ejangue.

England boss Neville, whose team will now face Norway in Le Havre on Thursday for a place in the semi-finals, told BBC Sport afterwards that “it didn’t feel like football”.

And he said in his post-match press conference: “I sat through 90 minutes there and felt ashamed.

“I’m proud of my own players’ performances and behaviour under circumstances that I’ve never seen on a football field before, and completely and utterly ashamed of the behaviour of the opposition.

“I didn’t enjoy the game for that reason, my players didn’t, apart from the fact we’re now in a quarter-final.

“All those young girls and boys that are watching back in England, playing in grassroots football – we’ve had millions of people watching England play a game against Cameroon with that kind of behaviour. I think it’s pretty sad.

“It takes you back to the times when you were a kid, you lost and you went home crying with your ball.”

There was a VAR check in the closing moments of the game when referee Qin Liang reviewed footage for a possible red card when Houghton was the victim of an awful challenge by Alexandra Takounda, the final outcome being a yellow.

Neville said Houghton was “in a lot of pain” with ice on her ankle and added: “We’re concerned about her.”

And when he was asked about a claim from Cameroon’s midfielder Raissa Feudjio that their boss Alain Djeumfa had told his team at half-time that “the referee wants England to win”, Neville said: “Their team mirrored their manager.

“If that was any of my players, and it will never be, they would never play for England again, with that kind of behaviour.

“I feel sorry for the referee. The decisions were correct.

“I would say get your ship in order first, before you start throwing stones.”

Neville, whose players have been staying at the same hotel as Cameroon’s, also made reference to “people fighting in the VIP area” and “Cameroon people fighting at our hotel”, but declined to expand on the subject.

When asked if he felt FIFA should take action over what had happened, Neville said: “I’m hoping this is just an isolated incident with a group of players that so desperately wanted to do well.

“I think the images will be powerful and I think that will be enough of a punishment and deterrent from doing it in the future. I’m sure they regret how they behaved.”