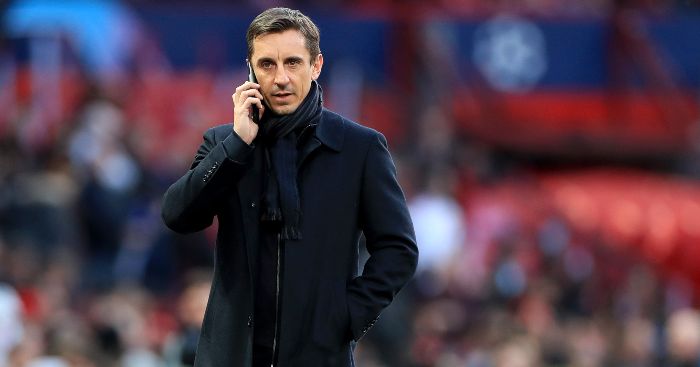 After a run of poor form, the Reds have now won two Premier League matches in a row against Tottenham and West Ham, with the victory over the Hammers moving them up to third in the table.

“The victory at Spurs on Thursday was a big one,” Neville said on his Sky Sports podcast.

“Going there with a makeshift defence and also going to West Ham with it and performing so well. They were controlled against West Ham.

“You might have been a bit worried if you were a Liverpool fan, probably 50 or 60 minutes in when they were just passing a little bit too much and with no Sadio Mane and no Roberto Firmino, you were wondering where the goal might come from.

“But Mo Salah completely changed the direction of this game after it drifted for a little bit. He was absolutely brilliant in that 15-minute period where he got the two goals.”

On Salah’s second goal, Neville added: “It was so special [ the second goal].

“I have to say, you see the first goal, which is a really good goal, but it is one of those that you see quite often from Salah so you are not out of your chair thinking it is anything different.

“In fact, I’m more thinking don’t let him back on his left foot. How many times have I seen that as a full-back with these players that cut in from the opposite side?

“But the second goal is so, so good. It’s exceptional, it’s breath-taking. The best goals I ever think of, while I was at Man Utd, are the counter-attack goals where they are just devastating. The best teams really do have it, that precision.

“And to attack at pace with precision is the most difficult thing. The pass, first time, from Xherdan Shaqiri is exceptional. And then the touch, the first touch, is out of this world.

“We very rarely give the tag of world class, and we do have some world-class performers in the Premier League.

“That first touch and second touch was something different. It was an unbelievable goal. One of the best goals I have seen, certainly this season. I’m not going to say any season because we have seen some great goals, but it really did catch our eye. Everybody at home will just think wow, what a goal!”