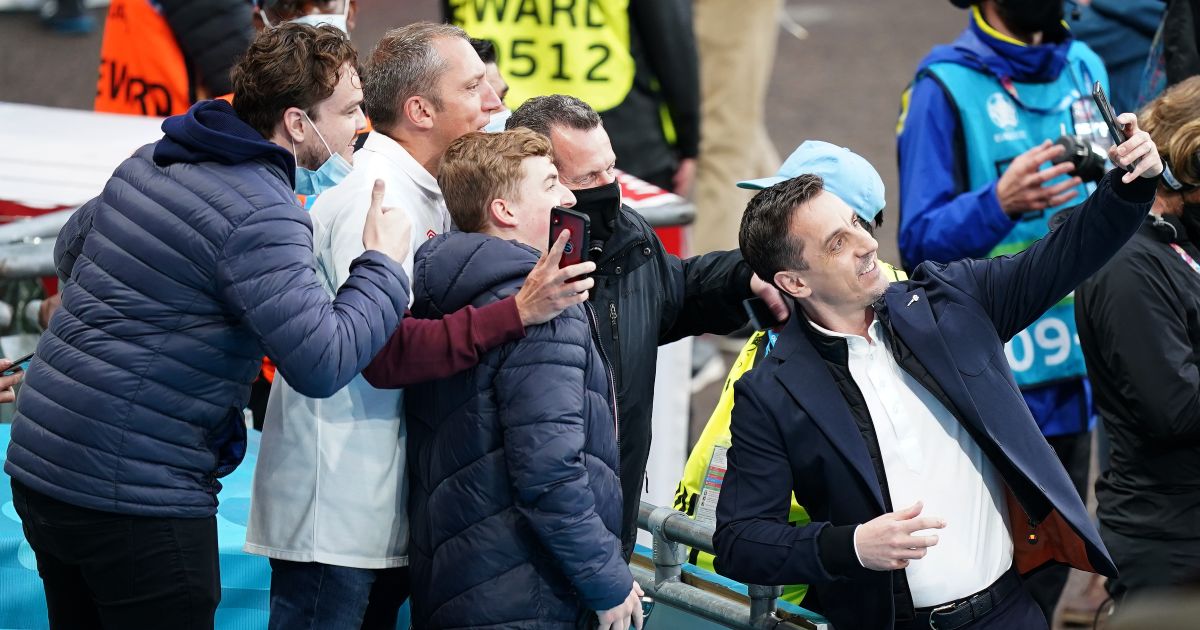 Gary Neville has defended England fans over their booing of national anthems with the former international seeing it as “fans trying to unsettle” their opponents.

England were charged with “disturbance caused by its supporters during the national anthem” on Thursday after home fans booed the Denmark national anthem and lit fireworks inside Wembley.

They were also charged after Kasper Schmeichel had a laser shone in his face before he saved Harry Kane’s extra-time penalty, although Kane scored the rebound to earn England a 2-1 victory on Wednesday.

The team could hardly have done more – they’re magnificent role models. It’s now up to the FA to find a way for the matchgoing fans to follow suit, because even while tweeting this I’ve just seen a story on the BBC about England supporters attacking a Danish family after the semi https://t.co/gSR6eBe6Y2

Neville says that when opposition fans booed the English national anthem during his days as an international he saw it as just “fans trying to unsettle us”.

“When I played in the different countries and our NA [national anthem] was booed I always took it as the opposition fans trying to unsettle us, drown our fans out and never as some kind of attack on us as people,” Neville wrote on Twitter.

“Same when we did it other teams. Is it really that bad and disrespectful?”

When I played in the different countries and our NA was booed I always took it as the opposition fans trying to unsettle us , drown our fans out and never as some kind of attack on us as people.Same when we did it other teams. Is it really that bad and disrespectful? Incoming🔥😂

“I hope someone does a documentary on Gareth. Someone should do it now and say, ‘Right, this is how you should lead teams, this is the identikit of the modern football manager, whether it be at club level or international manager, this is it’ because he does everything right.

“He ticks all the boxes. He makes light of a lot of criticism if he gets that, he continues, he has a belief, he’s very determined, he’s very driven, he’s very good with players, man-management, he’s very hard when he has to be.

“I just think it’s absolutely first-class, it really is. He’s at the top of his game at the top of the tree and I like him, I really do. He’s everybody’s ideal manager.”