Home All The News Neville: England are ready to attack last 16 of World Cup 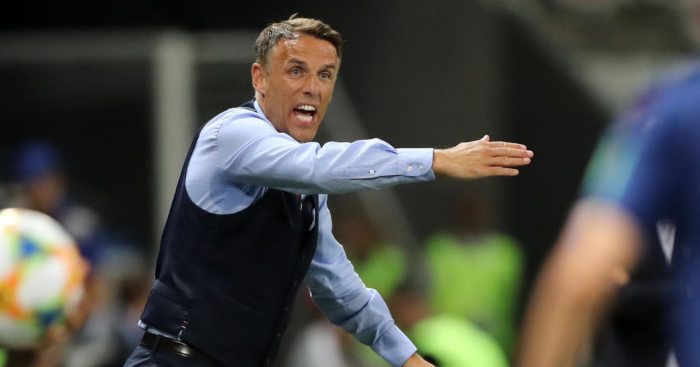 Phil Neville said England were “ready to attack the business end” of the Women’s World Cup after they wrapped up their Group D matches with a 2-0 win over Japan in Nice.

Having gone into the contest already qualified for the last 16 and needing to avoid defeat to cement top spot, the Lionesses completed a 100 per cent record in the pool as Ellen White netted a brace.

White produced a cool finish in the 14th minute following good work from Georgia Stanway, then slotted in her second goal, and third of the tournament, in the 84th having been teed up by substitute Karen Carney.

The latter effort came after a spell in which Japan had threatened to equalise.

And when Neville was asked afterwards if it mattered about the performance when the team was winning, the England boss said: “I think when we get to the last 16, it’s about winning.

“We place a big emphasis on winning. We do like to play with a certain style, and I think in the second half, because we were so open and just a little bit fatigued, we probably got exposed a little bit.

“We’ve got another clean sheet, we’ve won another game, we’ve played three and won three and we are just where we want to be – in the last 16, ready to attack the business end of tournament.”

Neville’s side, who previously beat Scotland 2-1 and Argentina 1-0, will now face a third-placed finisher in the next round – either China (Group B), or Cameroon or New Zealand (Group E), or Chile or Thailand (Group F).

That will be determined on Thursday when Groups E and F conclude, and the match will take place on Sunday in Valenciennes.

After stressing in the build-up to the Japan match that he wanted to win it and would pick his “best team” to achieve that, Neville made eight changes to his starting XI.

Neville, who had made four changes for the match before, said when asked what he might do for the last 16: “It depends on what team we are we playing.

“We need to decide which team we are playing, then decide how they play, how we are going to beat them, and then the players that are going to fit best, and I think that is what rotation is about.

“It’s not about throwing 23 players into a hat and pulling out 11, we strategically plan each rotation.”

Forward White, midfielder Stanway and goalkeeper Karen Bardsley, who superbly tipped a Kumi Yokoyama free-kick on to the bar in the ninth minute, were among those brought into the team.

Neville said he thought Bardsley, 34, was in the world’s top three goalkeepers, and said of 20-year-old Stanway: “If she keeps her feet on the ground, keeps progressing, working hard, and listening to the coaches, she is going to be one of the best players in world football – she has that potential.”

White, who joined Bardsley and Stanway at Manchester City just prior to the World Cup, had scored in the opener against Scotland before being demoted to the bench against Argentina.

She said: “I was pretty angry about that one.

“I’m surrounded by very talented players on the pitch. For us it was about winning the group and that’s what we’ve done, and now we look forward to the round of 16.”

Japan, whose goalkeeper Ayaka Yamashita made a number of fine saves, finished second and will face either Holland or Canada in the last 16.