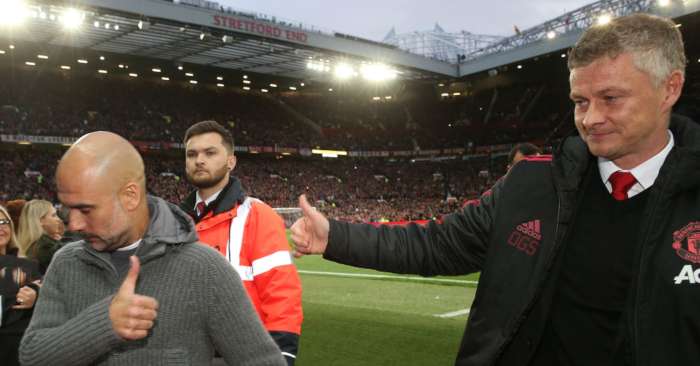 Phil Neville has admitted Manchester City are “miles better” than Manchester United and that it could take them “a long time” to close the gap.

The former United utility man, currently manager of the England team preparing for the Women’s World Cup, is a member of the Class of ’92 which took the club to the pinnacle of domestic and European football under Sir Alex Ferguson.

However, he has seen the Red Devils slip off the pace and while he believes former team-mate Ole Gunnar Solskjaer and his staff can halt the decline, he is concerned the club has abandoned its philosophy in recent seasons.

Speaking to The Offside Rule Exclusives, Neville said: “Over the last five years, you’ve seen a team that’s gone away from the vision and philosophy of what the club is all about.

“When you look at City, Liverpool and Tottenham, their club’s foundations are really strong – and you’d say United’s are from a financial point of view. But stability on the field?

“If you look at those teams [City, Liverpool, Spurs], they have a system and a style of play and a tried and trusted method, whereas United seem to be going left and right from manager to manager.

“They need to get back to what United do best, which is playing a certain brand of football which hasn’t just been synonymous with Sir Alex Ferguson, it’s from the year dot, Sir Matt [Busby], Ron Atkinson…

“You hope with Ole, Mick Phelan, Michael Carrick and Nicky Butt [in the Academy] that United will start getting back to the foundations.

“I think it will take a long time – it’s not a quick fix – but hopefully with those guys in charge and the financial muscle United have still got, they can get back challenging soon because it’s difficult watching Man City win everything.

“It’s difficult because you think they’re miles better than United at this moment in time.”