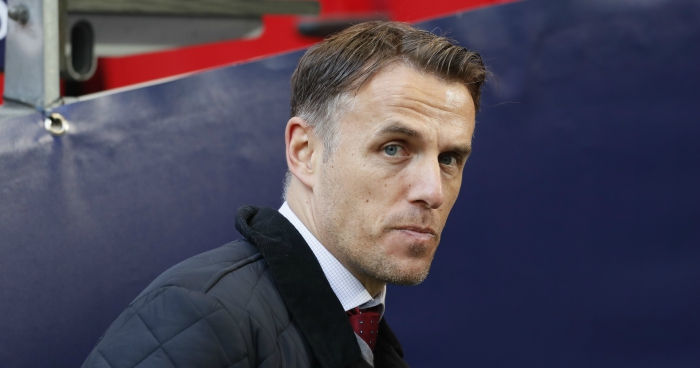 Two of the three tweets could be dismissed as mild banter, but one joked about domestic violence, Neville saying he had ‘battered’ his wife.

Even if the tweets are not enough to cause Neville to lose his job (and they surely aren’t), it’s hardly the best image for the Football Association to be portraying so soon after the Mark Sampson affair.

It’s also not the start Neville would want, given that he already faces a fight to prove that he is right for the job.

Here are the tweets that have got Phil Neville’s tenure as England women’s manager off to a controversial start (has now deleted his account). Might want to hold a press conference & address them, their relevance to doing the job, & his lack of managerial experience, fast. pic.twitter.com/bXrDViWBTW

Furthermore, Neville’s appointment has also been criticised by those who believe that the women’s national team job should not go to someone with no managerial experience, no experience within the women’s game and who did not even initially apply for the job.

The accusation is that giving Neville the job increases the old boys network, and makes the women’s game subservient to the men’s game.

“Yes, he doesn’t know the ins and outs of the women’s game but he’s adaptable and I don’t think it will take him long before he’s memorised every player who’s currently playing in all the leagues,” Osman told BBC Sport.

“He’s got a vast amount of experience of the men’s game, he’s represented his country many times and won trophies, so he’s coming from a strong position.”

Neville has been appointed as head coach until 2021.