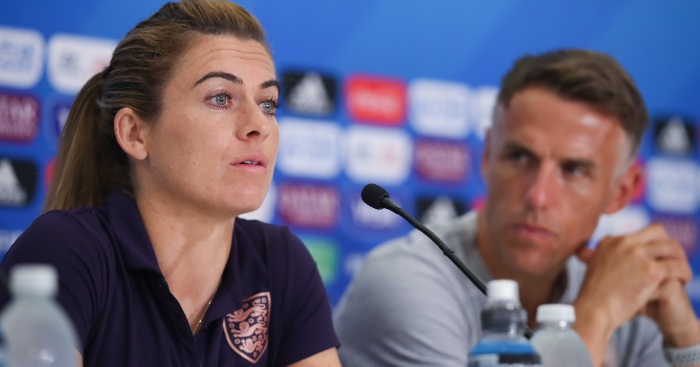 Karen Carney’s glittering career will come to an end after England’s World Cup play-off on Saturday.

The 31-year-old midfielder announced on the eve of the Lionesses’ third-place match with Sweden that she was calling time on her playing days.

Carney, a winner of 143 England caps, says the time is right to do something else.

“I am incredibly proud to have achieved so much in the game but now is definitely the right time to retire,” she said.

A scorer of 32 international goals, Carney’s club career has taken in hometown side Birmingham, Arsenal, Chicago and latterly Chelsea.

She also represented Great Britain at the 2012 Olympics and won bronze at the 2015 World Cup with England, as well as lifting this year’s SheBelieves Cup.

“To have played for England was my ultimate ambition and to do so at four World Cups and represent Team GB at a home Olympics was beyond the wildest dreams I had when first starting out,” she added.

“I’d like to thank everyone who has made this all possible from my family and friends, everyone I have played for and worked with and, of course, the England squad and staff. I owe everything I have to all of them.”

England manager Phil Neville added: “Karen deserves all the plaudits that will come her way. It’s been a privilege to work with her over the past 18 months, but even more special has been the chance to get to know someone who is an incredible person and a special team-mate.

“While she will not want a fuss, Karen is someone who deserves total recognition and respect as a true legend of the game.”

The FA plans to honour Carney’s achievements and contribution to the women’s game at a future international.

Only Fara Williams has won more England caps than Carney, and Baroness Sue Campbell, the FA’s women’s director, said: “Karen will be regarded as one of English football’s great names. Her humility, despite all she has achieved on the world stage, is one of many endearing qualities.

“She’s played a huge part in the Lionesses’ incredible progress on the pitch and the inspirational impact the squad has had off it.

“I know Karen will be much missed by everyone at Chelsea and England, but I’m certain she’ll stay in the game as she has so much to offer.

“She’ll always be welcome at Wembley and St George’s Park and it’s right and proper that we mark Karen’s wonderful career in a fitting way in the months to come. We’re all so very proud of her.”

She wrote on Twitter: “A player who I looked up massively growing up and still to this day, learnt so much from this wizard. Absolute honour to train, play and to call you a team mate. Absolute legend, wish you all the luck in the future.”

Carney sat alongside Neville at his pre-match press conference at Nice’s Allianz Riviera on Friday.

And she said: “I’ve probably known for quite a while now. My mind still wants to do everything, but I don’t think my body can any more.

“My mind would want to continue until I was 100, but at some point your body tells you enough is enough, and I think I’ve got to that point.

“I remember reading a quote from (former Germany forward) Birgit Prinz, one of the greatest female players ever – she said you keep going until you’ve got nothing else more in the tank, and I don’t think I have any more.

“So that’s why I’m confident and I know it’s the right decision for me, because I feel I’ve given my heart and my soul for my clubs I’ve played for and especially my country. I don’t think there’s anything more I could physically or mentally give and I don’t have any regrets with how that has happened.

“I think probably a career highlight would be telling my mum when I was 11 that I would play for England, and then at 17 doing it.”

Neville said: “It’s something me and Karen have privately been talking about for the last six months.

“143 caps for England, 144 at some point tomorrow. It deserves the utmost respect.

“We at the FA have been speaking for a long time about how we recognise the legends of our game, and maybe in the past we haven’t done that.

“But I think over the last two or three years on both the men’s and women’s side, I think we’ve now started to recognise that things like this need to be celebrated and recognised.

“I feel incredibly honoured that I, in a short space of time, got to know one of our greatest players, and more importantly, what an amazing person. That makes me a lucky manager.”