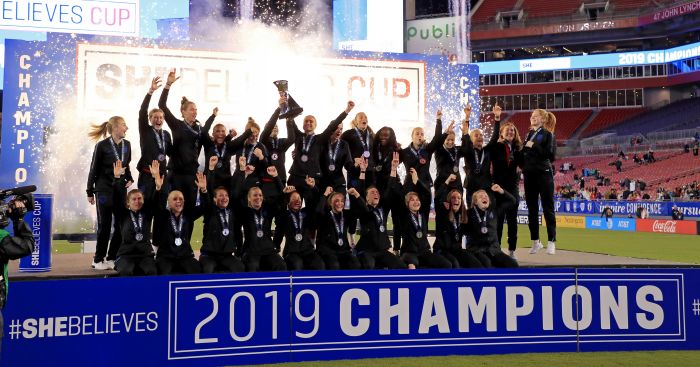 England manager Phil Neville hailed a “sensational performance” after his side clinched the SheBelieves Cup for the first time.

An emphatic 3-0 victory over Japan in Florida ensured England secured the silverware in style, with first-half goals from Lucy Staniforth, Karen Carney and Beth Mead sealing the deal.

Speaking after the match, Neville said he was determined to enjoy his first trophy as a manager, and praised his team for staying humble.

“It was a sensational performance,” he told BBC Sport. “I wasn’t that bothered before the tournament whether we won or lost, I just wanted to see an improvement and we go home knowing we are definitely in the right direction.

“We just keep listening to USA, Japan and Brazil talk about how good we are. But we remain humble, have fun and enjoy moments like this.

“You don’t get many chances to get your hands on a trophy. It is my first as a manager so I am just going to enjoy it.”

England, after beating Brazil and drawing with world champions the United States earlier in the four-team tournament, needed victory in Tuesday’s winner-takes-all encounter to lift the trophy.

They controlled the opening stages at the Raymond James Stadium in Tampa and raced to a three-goal lead inside half an hour.

Attacking midfielder Staniforth provided the 11th-minute opener, collecting a flicked pass from Jodie Taylor and advancing to the edge of the D before unleashing a low shot into the bottom right corner for her second international goal.

Taylor, who had earlier been narrowly off target after turning in the box, then laid on the second for experienced winger Carney.

A long throw from Lucy Bronze freed Taylor on the right and she hooked the ball back to leave Carney with a simple headed finish from inside the six-yard box.

Japan fell further behind on the half-hour mark as Mead fired a left-footed effort past Japan goalkeeper Erina Yamane at the near post.

However, the Lionesses’ success came at a cost as Izzy Christiansen limped off injured with the start of the World Cup only three months away.

The Lyon midfielder was reduced to tears while receiving treatment for possible knee and ankle problems suffered during a hefty collision with Japan defender Risa Shimizu.