Home All The News Neville, Henry and more lay into ‘garbage’ Moreno 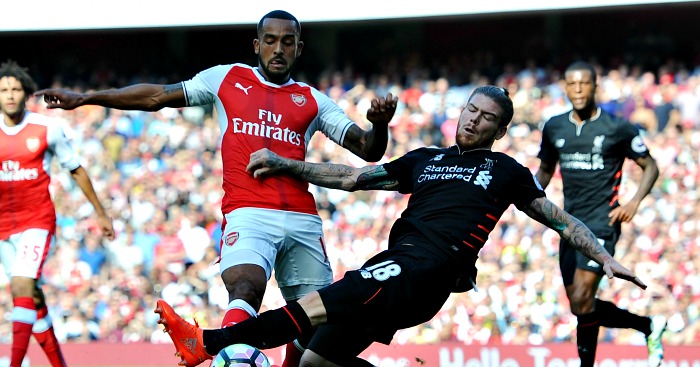 Gary Neville and numerous other assorted pundits were aghast at the performance of “absolutely garbage” Alberto Moreno on Sunday.

The Liverpool left-back conceded a penalty and was partially at fault for Arsenal’s opener during the 4-3 victory at the Emirates.

Moreno has come in for increasing criticism since joining the club in summer 2014, with Jamie Carragher imploring the club to “buy a f***ing left-back” after a poor performance in the Europa League final in May.

Our own Daniel Storey wrote the following in 16 conclusions from the game:

‘The foul for Walcott’s penalty was like a work of modern art, Moreno caught out of position before steaming into a challenge. The ball was there to be won but Moreno ignored it admirably, instead clattering into Walcott’s ankles. Penalty Arsenal.’

Neville, who was working for Sky Sports, branded the Spaniard “absolutely garbage” after yet more high-profile mistakes.

“You might as well start a goal down with Moreno at left-back,” Neville added.

His brother, Phil, told BBC radio 5live: “I’m astounded by Moreno’s position for the goal. He was 15 yards in front of Walcott. He’s all over the place.”

Pundits in the Sky studio attempted to make sense of the 24-year-old’s showing.

“He’s been all over the place. On top of everything he has the gumption to complain about the penalty!” said Thierry Henry.