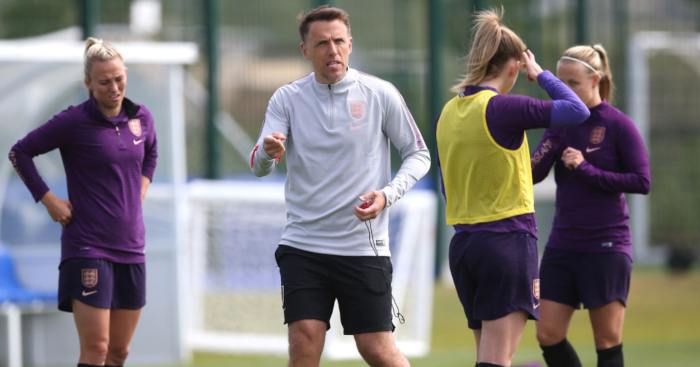 Head coach Neville has made no secret of his ambition to guide the Lionesses to glory in France this summer.

His side are among the front-runners for the tournament but were given a timely reminder of the difficult task facing them during Saturday’s surprise 1-0 friendly defeat to New Zealand in Brighton.

England, ranked third in the world, kick-off their Group D campaign against neighbours Scotland in Nice next Sunday.

“We’ve talked long and hard about it, we’ve not been shy about our expectations. Now we need to deliver,” said Neville.

“That’s what’s really my excitement and my challenge. We’ve dreamt of this moment all our lives.

“People don’t just knock on your door and give you a World Cup medal.

“We’re not favourites for the tournament but what we’ve said is we’re going to go there and give it our best shot.”

England’s final match on home soil was expected to be a morale-boosting send off in the south-coast sunshine.

Yet, despite dominating a team sitting 16 places lower in the world rankings, they struggled to create and the majority of the 20,000-plus crowd went home disappointed after a goal against the run of play from Sarah Gregorius.

Energy-sapping temperatures in excess of 20 degrees created difficult conditions at the Amex Stadium, although it is likely to be warmer in the south of France next weekend.

Neville’s players have been taking extra steps in training in a bid to be prepared for the heat.

“They’ve all be wearing the Nike undergarments and for 10 to 20 minutes a day they’ve been going in the sauna. We’re talking about marginal gains,” said Neville.

“(Saturday was) brilliant for them because it almost replicated what we’re going to get.

Neville, who made 10 changes for the New Zealand game, knows his World Cup starting XI but will wait to tell his squad.

The former Manchester United and Everton man dreads informing players they have been left out and has begun announcing his selection earlier to give them time to accept his decisions.

“The five-minute meeting we have when I name the team is the worst part of my job because you see the pride in the 11 and you see the utter disappointment in the non-11,” he said.

“I’ve realised over the last 16 months that you have to handle it in a certain way.

“We’ve brought the naming of the team a day forward to allow them to digest and to understand and process the decision.”