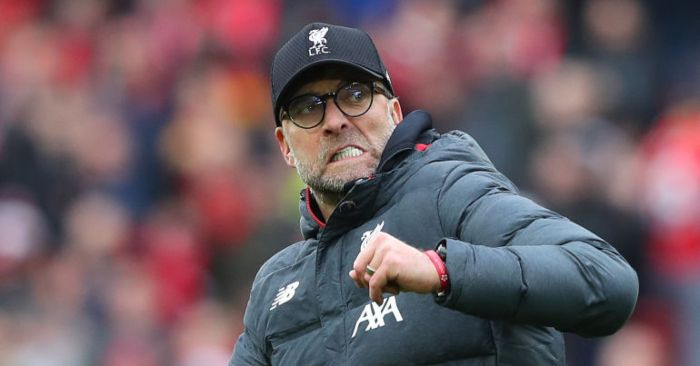 Klopp has just won the Premier League title with a very settled front three of Mo Salah, Roberto Firmino and Sadio Mane; signing other forward players means either noses are put out of joint or new arrivals are straight on the bench.

Neville – who says Liverpool need to win more trophies to be a ‘truly great side’ – has been talking to Sky Sports about how to retain the title and says:

“I saw an article which said Jurgen Klopp wasn’t going to go into the transfer market and that he was going to trust in his young players coming through. I don’t know how true it was, but I thought it was interesting.

“On one hand you like the principle because you want to see young players coming through in English football. Liverpool have had success with Trent Alexander-Arnold, who has been sensational. On the other hand you don’t want to be think everything is OK and not improve.

“When you have created a team that has won a league and the Champions League, do you say things are OK, do you change it before it needs changing or do you leave things as they are and risk things becoming a bit stale and a little bit comfortable.”

READ MORE: Only shame is that Liverpool brilliance will escape history books

“That is the challenge of a great manager, and that is where Sir Alex got it right over many years. He nudged players that were getting comfortable, he’d bring a player in to challenge them, he’d leave you out of the team for a week or two. Klopp is going to have all of those challenges.

“Klopp has got a similar conundrum developing that Sir Alex had with a different part of his team. Sir Alex had a midfield four – David Beckham, Roy Keane, Paul Scholes and Ryan Giggs – that I think is the best British football will ever see. How could you break that four up?

“There’s a similar situation with the front three at Liverpool where Mohamed Salah, Roberto Firmino and Sadio Mane are that good that you end up with a Divock Origi or Xherdan Shaqiri in support.

“If you bring in a really world-class player to challenge them, you could end up with one of the world-class players that they’ve already or the new arrival sitting on the bench. Or you try to shoe-horn on into midfield and it changes the dynamic. Then you lose the balance and authenticity of the title-winning team, that honesty.

“Sir Alex had that challenge of how to change the dynamic in that period around the turn of the century. We had four strikers, Andy Cole, Dwight Yorke, Teddy Sheringham and Ole Gunnar Solskjaer, you couldn’t get four better strikers for the club.

“Eventually it took three or four years to split that up, Ruud van Nistelrooy came in, Juan Sebastian Veron came in and the dynamic changed, and it took a bit of time to settle. Keane and Paul Ince were a midfield paring that were out of this world, but Sir Alex wanted to bring Scholes and Nicky Butt into the team so Ince had to go. You’ve got to make big decisions and sell and buy at the right time.

“I don’t think Jurgen Klopp is in that position yet, but he will be thinking about how he adapts, challenges, improves and maintains this team’s standards over the next 18 months. They will be difficult decisions to make but also good ones because they are being made from a winning position.”