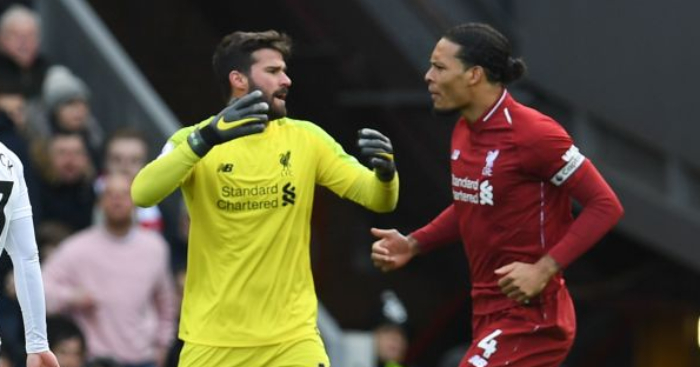 Gary Neville claims Alisson should be named Player of the Year, as he has had a more significant impact than Virgil van Dijk at Liverpool.

Neville was involved in a public spat with Loris Karius in 2016, which drew criticism from Jurgen Klopp.

And the Sky Sports pundit believes the signing of Alisson was the biggest key to Liverpool’s recent success, comparing the Brazilian with Man Utd legends Peter Schmeichel and Edwin van Der Sar.

“I think Allison has made Liverpool win the League,” Neville told the Mirror.

“I think when people talk about van Dijk being the missing piece I think that there is an element of that.

FEATURE: Klopp might be facing his biggest Liverpool challenge yet

“When I go back to two years or three years ago, I was very critical of the goalkeepers that were at Liverpool. I said I felt that they would never win the League while the current goalkeeper was in the position.

“Jurgen Klopp came for me, I don’t know whether he was angry with me but he certainly had a go at me in the media.

“But as soon as Allison came – I saw it at Manchester United with Schmeichel then I saw it in that next spell where we had greatness with Van Der Sar.

“Once your goalkeeper is calm, authoritative, saves most shots on his goal, gives confidence to the rest of the team, the impact of that is absolutely incredible.

“For me Van Dijk is one of the best centre halves I have ever seen live but for me, if you’re talking about the last two years; what’s been the big change for me in Liverpool is the goalkeeper.

“They won the European Cup and they won the League. I put van Dijk just behind but Alison for me has been the biggest impact at Liverpool.”