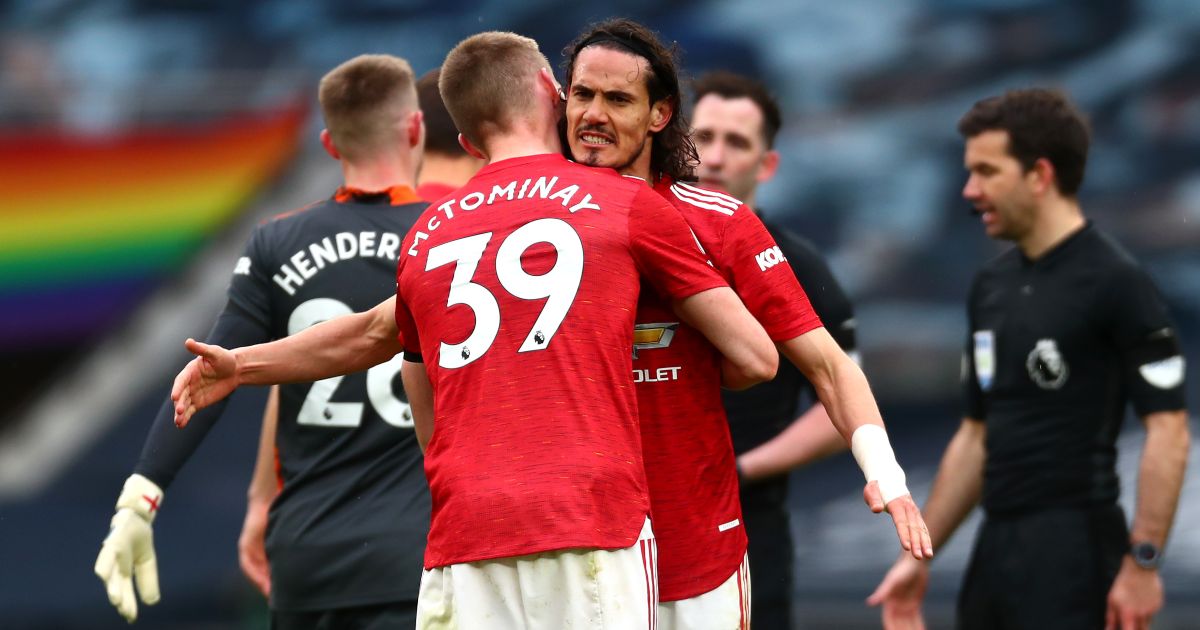 Gary Neville thinks Mason Greenwood and Marcus Rashford will benefit if Edinson Cavani decides to stay at Man Utd for another season.

The Uruguayan has been heavily linked with a move back to South America with Argentinian giants Boca Juniors – but Ole Gunnar Solskjaer recently revealed that Cavani is “still unsure what he wants to do next season”.

And Neville admits that he feared Cavani would become the latest”showcase signing” to flop at Old Trafford, like Alexis Sanchez and Falcao, but now finds himself hoping the 34-year-old stays for another season.

Neville told Sky Sports: “Tottenham had a throw with two minutes to go, and Cavani was moving between the centre-backs trying to stop the ball from being thrown in, and he’s organising where [Mason] Greenwood should be. I thought: ‘Greenwood needs another year of Cavani being alongside him.’

“It inspired us as young players when you saw great players like Bryan Robson and Steve Bruce and Eric Cantona and Mark Hughes. And you see the best players in the world, or those who have been the best in the world like Cavani, doing his work like that in the 94th minute, someone like Mason Greenwood, who needs people who are mentors, good standards above him, who can coach him on the pitch, I just thought him and Marcus Rashford need another year of Cavani.

“He’s been a really brilliant example. I was a little bit nervous of him coming in, because of Falcao, Alexis Sanchez, showcase signings. This one has been different. He’s really applied himself brilliantly and has been a big help to Manchester United.

“He does the right things. The right movements. It’s clockwork, that run across the defender, across the near post, the one you’re always trying to get young strikers to do.”

The Red Devils were poor for the first half an hour or so against Tottenham but second-half goals from Fred, Cavani and Greenwood sealed an impressive comeback victory.

Neville added: “First half nothing happened, and then all of a sudden the game came alive. The United performance in the second half was outstanding. Spurs were just not able to cope, irrespective of whether you wanted something more from them – I did, and I thought it was a really disappointing show given what was at stake for them – but United were absolutely outstanding.

“They came out second half and were just a different team, with urgency. Something sparks them and then all of a sudden they come alive.

“They can’t keep doing that, because when fans are in the stadium, if teams like Spurs get in front of them, with the fans behind them, they won’t be allowed to be as insipid as they were in the second half, Spurs.

“I think they’ve got to sort it out, Manchester United. But if you’re looking for character in a football side: winning away from home, winning from behind, winning when you’re not playing well, being good on set-pieces, those things that define resilience and good character, they’re the things you look at, and this United team have it in abundance at the moment.

“Second half they were breathtaking at times, and some of the football was brilliant.”