Home All The News Neville: ‘Man Utd in the pit with the rest of the sharks’ 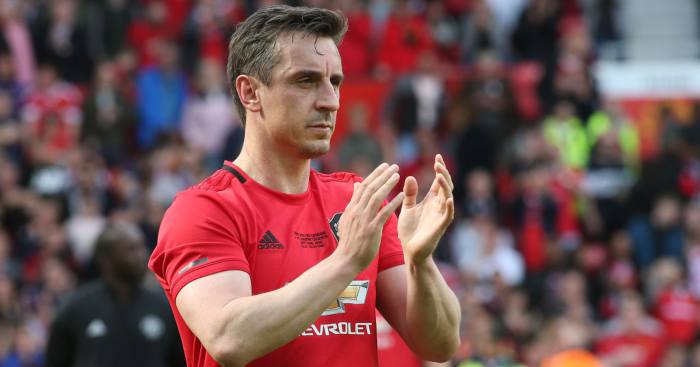 Gary Neville thinks Manchester United could find it “difficult to do business” this summer as they are “in the pit with the rest of the sharks”.

Ole Gunnar Solskjaer had hoped to have the majority of his signings in place before United‘s squad gets back together on July 1, but that is looking unlikely with only Daniel James through the door.

Aaron Wan-Bissaka is another player that is understood to be close to joining United but other reports indicate that the inflated prices are making it hard for Solskjaer to get all his targets in.

“Everyone knows Manchester United want players and price tags will go up.

“You’ve got to try and encourage players to come to the club. Players don’t just jump to sign for any club – they do their homework and get their agents to get to work. They probably have 50 meetings before they sign for a club nowadays.

“Manchester United will be in the pit with the rest of the sharks looking for the big signings.

“It’s difficult for all clubs as they all want the same players. They all want Harry Maguire, every single club wants him. Everybody wants Christian Eriksen.

“Players that are being bandied about, there are four or five clubs in for them.

“They aren’t just going to sign for the first club, they’ll choose wisely and look at the different aspects.

“Manchester United have got a big job to do in order to get a squad right for a championship challenge.

“Hopefully that’ll start this summer but it’s not just bringing players in, it’s about getting some out.”