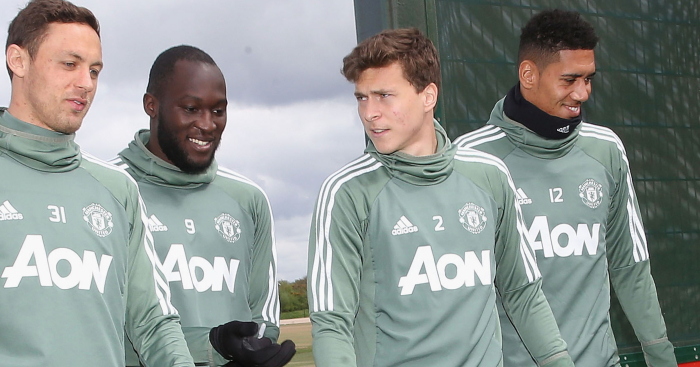 Gary Neville reckons Man Utd manager Jose Mourinho might have settled on his central defensive partnership for the time being.

Mourinho was denied the opportunity to recruit another top-class centre-back during the summer and United’s opening games of the season made that decision at board level look like a dreadful mistake.

The Red Devils conceded seven goals in three matches against Leicester, Brighton and Tottenham but Mourinho’s men have got back on track with a couple of wins at Burnley and Watford.

Chris Smalling netted at Vicarage Road and impressed throughout alongside Victor Lindelof, who had struggled since arriving at Old Trafford a year ago. They were protected by Marouane Fellaini.

Neville believes Mourinho will give the pair the chance to establish themselves as his first-choice partnership.

“I said earlier there wasn’t an obvious pair amongst them and now Jose has obviously settled by picking them again,” Neville told the Manchester Evening News.

“I thought Chris’ goal was amazing and Lindelof needs a chance. United need to find out about him and Saturday will have been one of the more difficult, physical games for him to combat.”

Some identified a lack of leadership in defence as part of United’s problem at the back but Neville dismisses that theory.

“You can say that about any team now, that they lack leadership at the back,” Neville said.

“But, football is different and there aren’t as many players who are as vocal as there used to be. But, Antonio Valencia is a leader by the way he has played over the last two or three seasons.

“So there are leaders within the team who can influence in different ways.

“It was a big win against Watford and I’m happy, and hopefully now United will start to climb.”