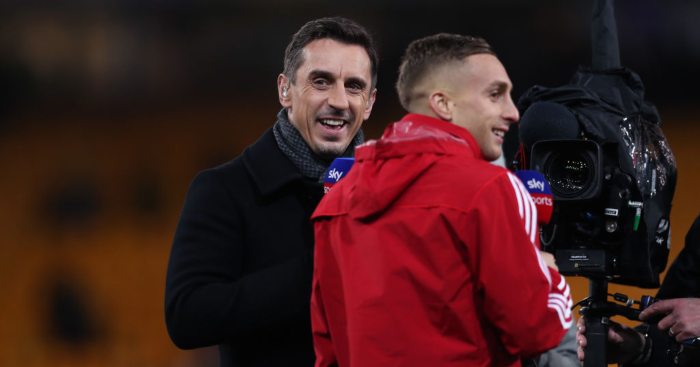 Gary Neville has picked out the names of seven Manchester United players that provide him with hope for the future.

There is a sense of optimism around Old Trafford having collected a fourth Premier League win of the campaign by comprehensively overcoming Graham Potter’s Albion on Sunday afternoon.

Andreas Pereira’s deflected effort was swiftly followed by a Davy Propper own goal, with Marcus Rashford hitting a fierce drive off the underside of the bar to complete a 3-1 victory for United after Lewis Dunk had reduced the deficit.

It was an impressive performance by United having hit three past Partizan Belgrade on Thursday, leaving Ole Gunnar Solskjaer with a smile on his face.

Despite only sitting seventh in the Premier League table, nine points off fourth and 18 points off top spot, Neville thinks there are some positive vibes coming out of Old Trafford at the moment.

“It’s been a really good month for Manchester United barring the Bournemouth defeat,” Neville told Sky Sports. “That game was frustrating and took us back a few steps but generally it’s been a better month than the one before.

“They need another centre back, they need a left back and a couple of central midfielders and a striker or a forward.

“That’s not going to change and won’t change entirely even after January. But there’s something there.”