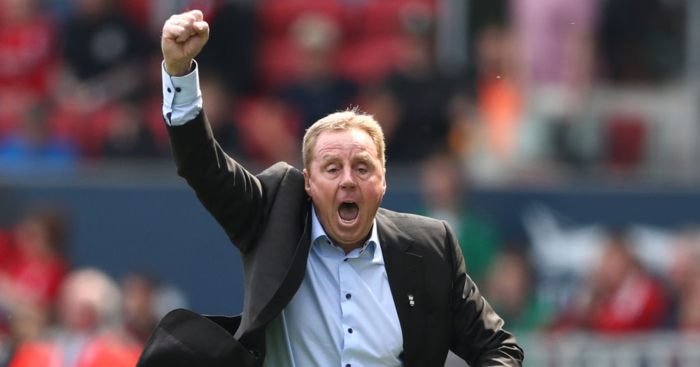 Harry Redknapp has blasted back at Gary Neville in their ongoing and pretty tiresome feud.

The pair have exchanged barbs since, with even Steve McMahon getting involved. Valencia has been brought up, which is a load of utter bollocks.

Neville fired back at Redknapp on Friday, pointing out that his supposed terrible record in charge in Spain was actually better than Redknapp’s at two of his most recent posts.

But Redknapp is determined to have the final word.

“To say that for 30 years Tottenham have been spineless, gutless, useless, disgraceful – that’s absolute rubbish,” he told talkSPORT. Neville did only use one of those words – “spineless” – but still.

“So now he’s got to dig up that his win percentage was one per cent better than mine at QPR… I took over a QPR team that had already played 14 games in the Premier league and they had two wins, so it wasn’t exactly taking over a world class team, you know?

“And at Birmingham I took over a team that had gone 25 games and only won one, that wasn’t easy.

“My argument was about the Tottenham team I had, and I will not stand by and let someone come out with a statement like that when their facts are completely wrong.

“Well the present team have had four years [under Pochettino] and they haven’t won anything either, but does it make them a bad team? No it doesn’t! I love watching them and I love the manager.

“We all know Gary, he is an excellent pundit and was a great right-back, but he’s opinionated and sometimes he goes over the top. He hasn’t got his facts correct in this case and he should have thought a little bit more about what he was saying.