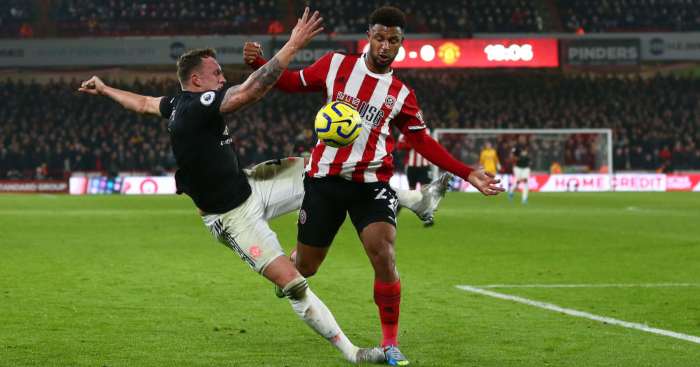 Gary Neville has hit out at Phil Jones for failing to deal with the “easiest ball in the world for a centre-back to deal with” in Manchester United’s 3-3 draw with Sheffield United on Sunday.

The Red Devils were abysmal in the first half at Bramall Lane and were fortune to only be behind to John Fleck’s strike against a superb Sheffield United side.

Ole Gunnar Solskjaer admitted he was angry at half-time and his mood would not have improved when Lys Mousset doubled the hosts’ lead early in the second half.

However, the Norwegian will have taken some comfort from a sparkling seven-minute spell his side produced to turn the game on its head as goals from Brandon Williams, Mason Greenwood and Marcus Rashford had the Reds in front with 79 minutes on the clock.

Solskjaer was denied a sixth victory in the last seven matches by Oliver McBurnie’s last-minute equaliser.

The Man Utd boss took off Jones at half-time for Jesse Lingard after the former Blackburn Rovers defender was at fault for Fleck’s goal.

And Neville was baffled at how Jones failed to deal with a routine ball into the channel in the lead up to the goal.

“If ever a goal had been coming… the warning signs were there. [Harry] Maguire and Jones, they can’t handle the running of Mousset and [David] McGoldrick in behind them,” Neville said in Sky Sports commentary.

“It’s agricultural, it’s a channel ball, the easiest ball in the world for a centre-back to deal with and Phil Jones doesn’t deal with it.

“Sheffield United get their just rewards. There’s a little bit of good fortune at the end.

“Jones just has a look over his shoulder and in that moment he loses control of the duel and Sheffield United, look at them – four of them in the box! Mousset gets his reward for following in.”