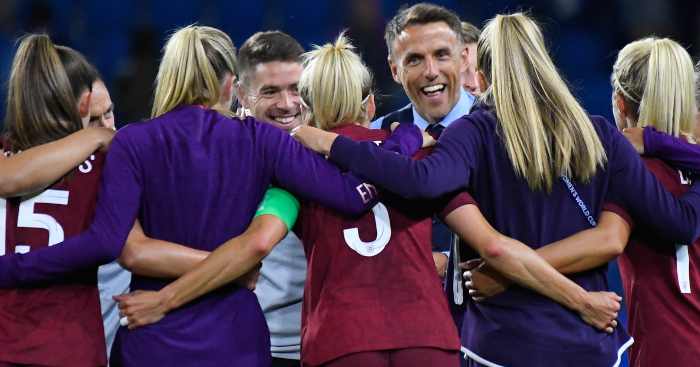 England boss Phil Neville expressed his pride in his players at the end of an “emotional day” after the Lionesses sealed a place in the last 16 of the Women’s World Cup with a 1-0 win over Argentina in Le Havre.

Jodie Taylor scored in the 61st minute as England, who had earlier seen Nikita Parris’ penalty saved by Argentina goalkeeper Vanina Correa, made it six points from two matches in Group D.

At the end of the game at the Stade Oceane, Neville comforted an emotional-looking Fran Kirby.

When asked about that afterwards, Neville spoke about how Friday would have been the birthday of the forward’s mother, who died when Kirby was 14, and also made reference to Carly Telford, the goalkeeper who made her World Cup debut in the match. Telford lost her mother to cancer last year.

Neville said: “We’re a family. We were aware today it was Fran’s mum’s birthday.

“It’s been well documented, her love and the affection she has for her mother and how much she misses her.

“We had Carly Telford, who lost her mother as well, and she made her World Cup debut today after being in many a World Cup squad (this is her third World Cup) and never getting on the pitch.

“In the huddle at the end, we made reference to the fact that we hope their two mums were looking down on them, they were very proud of their performances. I thought Fran was outstanding tonight.

“We help each other. Today has been really an emotional day for everybody. Fran is a special person who misses her mum, and so does Carly Telford. So today we shared their emotion, their happiness, and their sadness.”

The #Lionesses progress through the @FIFAWWC group stages! pic.twitter.com/ypVi8z3iYS

Taylor’s goal came when she turned the ball in from Beth Mead’s cross at the end of a good move.

Argentina used some physical tactics at times as they frustrated England prior to that, and Neville said: “We were expecting it, really.

“To be fair, there’s something I admire in that never-say-die attitude and trying anything possible to win the game.

“What we spoke about at half-time was keeping our heads and discipline. We knew for them to compete with us they had to do everything possible, but my players kept concentration unbelievably and I was really proud of them.

“I thought they were outstanding. We asked them to play with patience, control, rhythm and speed and we dominated the whole game, like we did against Scotland (the 2-1 win on Sunday) apart from 11 minutes.

“We’ve got a team that are really enjoying this World Cup.”

Parris, who had scored a penalty in the Scotland match, had to wait a considerable amount of time to take the spot-kick on Friday before seeing her effort pushed on to the post by Correa, who made further impressive saves to deny Mead and then Parris again.

Neville said: “I don’t get the delay. It was long on Sunday, but today it seemed set and then there still seemed to be another two minutes of delay.

“It’s something we probably have to get used to and be aware to maybe not put the ball down as quickly, and if there is a long pause, think of a strategy to overcome that.”

Argentina boss Carlos Borrello, whose side are ranked 37th in the world, said: “We weren’t going to go out against them on the attack. We had to try to defend our area.

“We know the status of our opponent and respect it but we’re also coming here for results ourselves.

“Obviously we didn’t come here looking to lose but I remember 2007 (when England beat Argentina 6-1).

“I think experience does teach us certain things, and we also had to focus on the physical side of things as well. England’s players are athletes.”