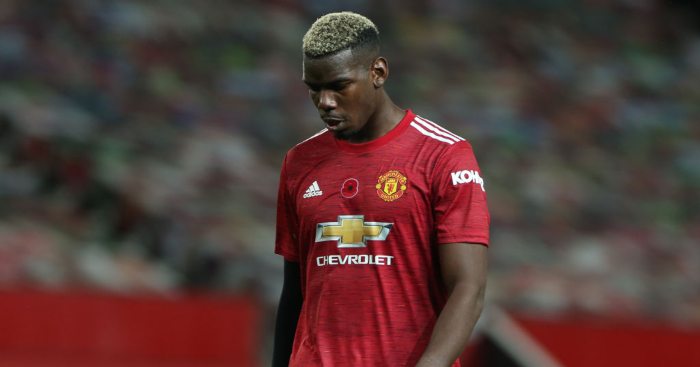 Phil Neville finds it “absolutely disgraceful” that Paul Pogba is not a guaranteed starter at Manchester United.

Pogba played just eight minutes of United’s 3-1 win over Everton on Saturday, the Frenchman having now been substituted on in as many Premier and Champions League games as he has started.

Neville is absolutely aghast at the idea that the 27-year-old is not a certain first teamer under Ole Gunnar Solskjaer.

“You can play one of them, Matic, Fred or McTominay and then you play Pogba with Fernandes.”

Asked whether Pogba can thrive in a deeper role, Neville replied: “Probably not no but I’d rather go out there and score goals, go out there and go for the win playing the Manchester United way with Pogba in the team.

“I know I’ve said about him wanting to leave, not wanting to be there and his inconsistencies but I still think he’s one of the best midfielders around. That’s why I’m thinking: Why is Paul Pogba not in that team?”

Pogba was reportedly left ‘disappointed’ and ‘unimpressed’ by United’s decision to trigger the 12-month extension option in his contract last month.

The midfielder is now tied to the club until summer 2022 despite once again publicly expressing his desire to leave.

“All footballers would love to play for Real Madrid. It might be a dream,” he said.