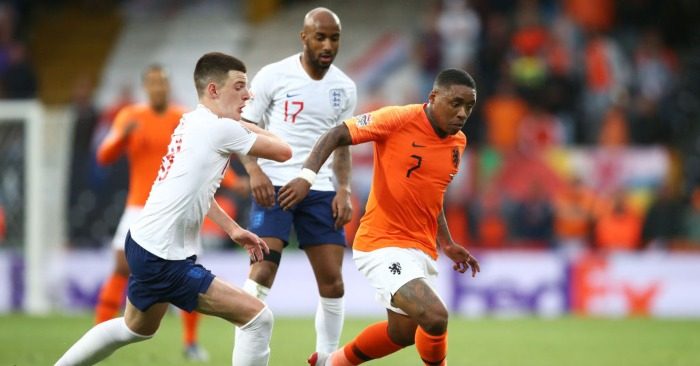 England’s defeat to the Netherlands in the Nations League semi-finals can be attributed to their weak midfield, according to Gary Neville and Jamie Redknapp.

Declan Rice, Fabian Delph and Ross Barkley all struggled to impose themselves against the Netherlands, though it is John Stones who will attract most of the criticism from fans and pundits.

Neville repeatedly defended England’s tactics of playing out from defence during his co-commentary on Sky Sports, and later laid the blame at the feet of the central midfield.

The Netherlands had the Barcelona-bound Frenkie De Jong and Champions League winner Gini Wijnaldum in their midfield; West Ham’s Rice and co could not cope.

“Those errors have been coming all night,” said Nevile. “The midfield just didn’t look competent against a really good midfield.

“England will need to improve. Gareth Southgate will have to think about whether he goes to a back three.

“That back four…I’m not sure it will be good enough against a top team.”

Redknapp echoed Neville’s thoughts about the England midfield, saying: “The major problem was the midfield. We can talk about playing out of the back but you need to have players in midfield who can take the ball in tight areas.  We still struggle to retain the ball.”