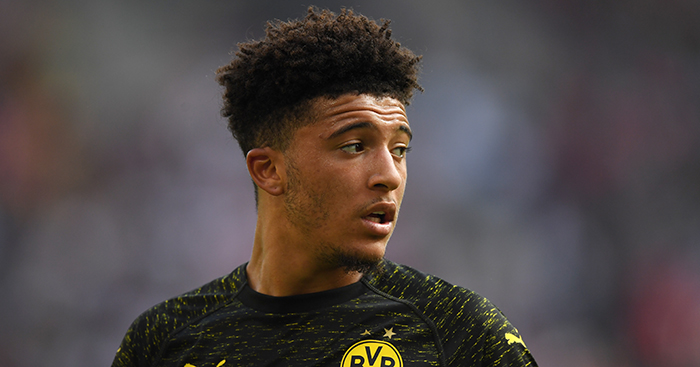 Phil Neville has urged Jadon Sancho to be “patient” and postpone a potential move to Manchester United.

United were confident of signing Sancho before the coronavirus crisis, but the financial implications of the pandemic look to have made the Red Devils more wary of a big-money move.

They remain keen on a move for the 20-year-old, but Borussia Dortmund insist they would prefer the England international to remain at the club for at least another year.

Sancho will reportedly have to force through a move, if he wants to move away from the Bundesliga this summer.

But Neville believes Sancho should remain professional and be prepared to call off a move to Old Trafford.

“He’s playing at the top, top level. If I was him I would be patient. I don’t think clubs can go out and pay £100m for a player like Sancho at this moment in time.

“It might be something that they’ll have to do in 12 months time but I have to say I think this kid is the real deal. I think he’s something really special.”

United have been linked with Sancho for over a year, but Ole Gunnar Solskjaer signed Daniel James to play on the right wing last summer when it became clear after the club failed to land their prime target.

But Neville claims the right flank remains a problem for United, and seems to have completely forgotten about James, who scored three goals and provided six assists in his first season at Old Trafford.

“When you look at United’s team I do think they need a winger,” Neville added.

“I know they’ve played Martial on the left but on the right they’ve had Lingard, Mata, Rashford sometimes.

“It’s a position that I think needs filling and I think Sancho is the best around in terms of English talent.”