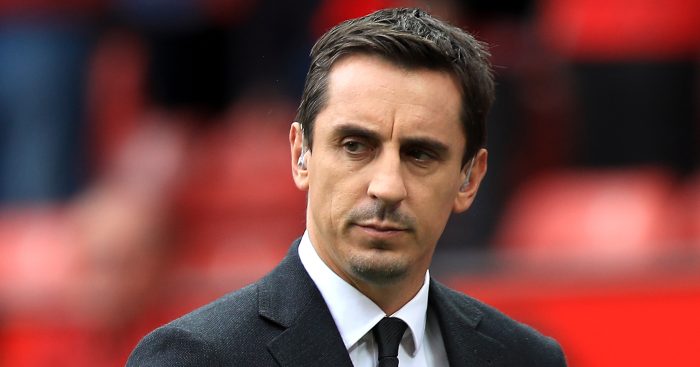 Gary Neville also suggested that despite their dip in form, everything is still “under control at Liverpool” under Jurgen Klopp.

Liverpool are going through a bad run of late. Jurgen Klopp’s side are winless in their last four Premier League games.

Over this stretch, they have only scored one goal. This poor form has seen them drop down to fourth in the top flight.

Despite this, Neville defended Liverpool’s front three of Mo Salah, Sadio Mane and Roberto Firmino. He also claimed that Diogo Jota’s injury has had a big impact on their performances.

Speaking on Monday Night Football, as cited by the Liverpool Echo, Neville argued that Xherdan Shaqiri, Takumi Minamino and Divock Origi are not good enough:

“To me, I feel like it’s all under control at Liverpool.

“They’ve played non-stop for three years and that fourth year is always the burnout year. It was for us (at Manchester United). We won three leagues twice but always dipped in the fourth year.

“This year, we’ve seen a little dip, it’s natural. I think Jurgen Klopp has already challenged and supported that front three by bringing Jota in, but Jota’s injured, so he could give them a rest – they don’t get a rest.

“The three players under that front three, Shaqiri, Minamino and Origi; they’re not good enough, so I’d say the main problem for Liverpool isn’t the front three.

“I’d say it’s Jota’s injury, the fact it’s the fourth season of basically running 100mph and the three beneath them haven’t been good enough to give them a rest because (Manchester) City have pushed them to the highest degree.

“They couldn’t rest them because they had to win that title. To me, it doesn’t feel like they should be breaking them up.

“What they need to do is get Jota back so one of them doesn’t have to play every week.”