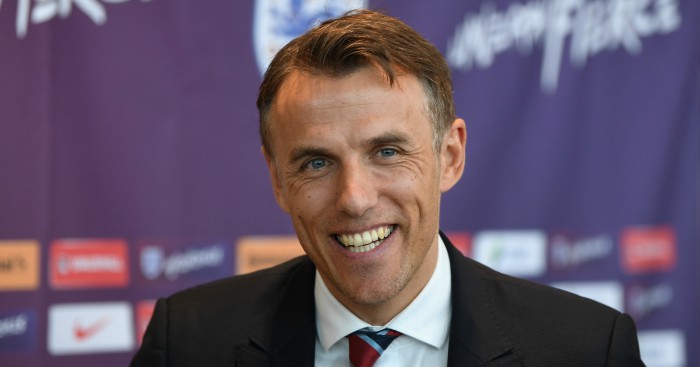 The England Women boss feels that with free tickets for such games huge crowds could attend, and has declared: “Let’s blow away the rest of Europe.”

On March 17 there was a crowd of 60,739 at the Wanda Metropolitano for Atletico Madrid against Barcelona, a world record attendance for a women’s club match.

Atletico’s game in January against Athletic Bilbao at San Mames had a crowd of 48,121, and on March 24 there were 39,000 present at the Allianz Stadium as Juventus Women took on Fiorentina.

But Neville, whose side face Canada at Manchester City’s Academy Stadium on Friday in the first of four home ‘Road to France Series’ warm-up matches ahead of this summer’s World Cup, said: “Looking at the attendances in our league yesterday, I actually think that’s better than the one-off games in Spain or Italy.

“There was 2,800 at Kingsmeadow (where Chelsea beat West Ham in the Women’s Super League), 1,500 at Solihull (where Birmingham lost to Arsenal). I think we’ve got a good foundation.

“I see games in Spain where there’s probably only 100 to 150 people watching. So I think as a base line, we’ve got probably a little bit more sustainability.

“What I would say is that some of the big teams in England now have got to open their big stadiums and fill it, and let’s say ‘let’s blow the rest of Europe away’ because I think our game in this country is at a far better place than what it is in Spain and Italy.

“I think now, if (second-tier leaders) Man United win the league, or (top-flight leaders) Arsenal – throw open your stadium, open it up.

“I think my players are at the level now where our big clubs have got to open their stadiums and let’s fill it and let’s blow away the rest of Europe.

“That’s my feeling having watched Bilbao, Juventus. They’ve done it, but let’s us do it maybe two or three times from now to the end of the season.”

Neville was then asked if he would advocate following those overseas games by having free tickets, and said: “Why not?

“Man United let people in for free when they play at Leigh, so why can’t you at Old Trafford? Why can’t we fill Stamford Bridge for a Champions League semi-final against Lyon? It would be incredible.”