Home All The News Neville: Tottenham can win title with ‘incredible’ attack 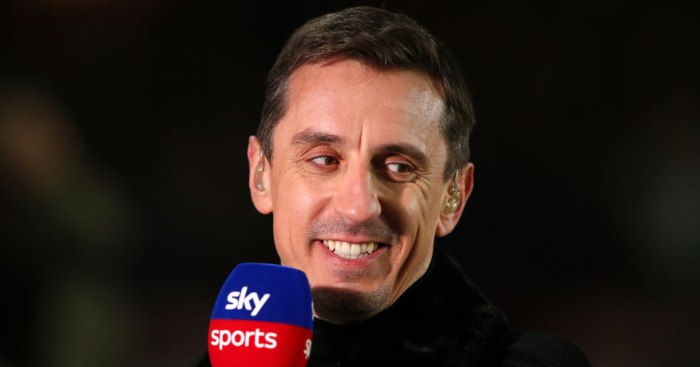 Mourinho took over as Spurs boss in November 2019 from Mauricio Pochettino. Since then he has enjoyed good success, as they finished fifth last season.

Tottenham have had a very fruitful summer in the transfer market. Gareth Bale made his long-awaited return to the club after spending nine years at Real Madrid.

The Welshman rejoined the Londoners on a season-long loan deal. They have also signed the likes of Sergio Reguilon, Pierre-Emile Hojbjerg and Matt Doherty.

Spurs have a strong squad for the 2020/21 campaign, especially in attack. Mourinho and Tottenham have enjoyed a successful start to the season.

They sit second in the Premier League heading into the international break. They also top of their Europa League group, and they are in the Quarter-Finals of the Carabao Cup.

This Premier League title race is expected to be much closer than last season. Tottenham’s positive start has fuelled talk that they could challenge the likes of Liverpool and Manchester City for the title.

Speaking on The Gary Neville Podcast, as cited by The Mirror, Neville claimed that it would be a great story if Tottenham do lift the trophy:

“I said a couple of weeks ago on Monday Night Football that Spurs couldn’t win the league, and I still don’t think they can.

“But I do agree with Jamie Carragher that it would be the most outstanding story to see Jose Mourinho win the Premier League with Tottenham.

“It would be something that would alarm Chelsea fans, Manchester United fans and Arsenal fans. It would be one of the great stories, because Tottenham don’t win leagues!

“He’s got the forward players to do it. You think of the strike force and the goal threat – it’s incredible.”