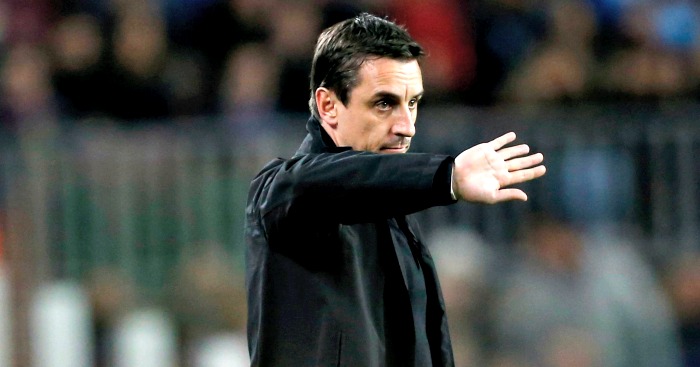 Gary Neville has urged Manchester United to let Jose Mourinho “see that contract through to the end”.

Mourinho’s future at United is in significant doubt after Tottenham inflicted upon the Portuguese his heaviest ever home defeat as a manager on Monday.

Tottenham won 3-0 at Old Trafford to consign United to a second straight defeat in their opening three games. Read 16 Conclusions and we can be friends.

It truly does feel like it is time to say goodbye for Mourinho at United, even though he only signed an extension to his initial three-year contract in January.

That deal runs until 2020, and Neville has implored his former club to avoid becoming “a club of madness” like Chelsea, who remain the only side to sack Mourinho mid-season.

“We saw Louis van Gaal sacked after an FA Cup final victory, we saw David Moyes sacked with four games to go of a season, so we are no longer talking about a football club that is behaving as it has historically done,” he told Sky Sports.

“I accept these are different times and I accept the difficulties and challenges, but my honest view as I stand here now is that Ed Woodward gave him a contract last season, only seven or eight months ago, and he should see that contract through to the end and do the job.

“You can’t keep jumping around with managers. I hear the third-year Mourinho stories and all the rest of it and you can’t disagree with those stories because there is some history.

“But what I would say is it’s time now for Manchester United to batten down the hatches and for Jose Mourinho and Ed Woodward to sort themselves out if there is a problem there.

“Get the team right for the rest of the season because the club is bigger than any individual. They have to get themselves sorted because it’s not a time for in-fighting and politics.

“It’s only at Chelsea, which is a club of madness, where this has happened. At Inter Milan, Porto and Real Madrid he saw it to the end so let’s not rewrite history. At Chelsea, everybody dies a little bit early. It’s that type of club, he’s not on his own there.

“It was tough for him at Real Madrid and he got through to the end of the season. I don’t see it happening during the season.

“In the last few years there has been an erosion of the beliefs. Jamie Carragher said last week the morals and traditions and bringing through British kids has gone out of the window when they sacked David Moyes and brought in Louis van Gaal.

“I get that and I understand that, but it is still too early – three games into the season – to start suggesting there should be a change of manager.

“Nothing could be further from the truth. It has to be that Jose Mourinho is allowed to go through and complete this season. If he does well he should go through the next season as well, which is when his contract runs out.”