Home All The News Neville: We left everything out there. We have no regrets 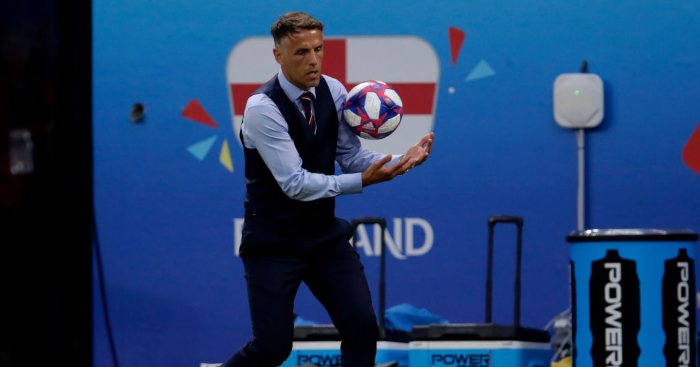 England boss Phil Neville hailed his players for having “given it our absolute all” at the Women’s World Cup after their 2-1 semi-final defeat against the United States.

Midway through the second half, England thought they had equalised through White, only for her finish to be disallowed on a marginal offside call following a VAR check.

The Lionesses were then awarded an 84th-minute penalty via VAR, but captain Steph Houghton’s effort was kept out by Alyssa Naeher.

Millie Bright was sent off soon after following a challenge on Morgan.

Rather than returning to the venue on Sunday for what would have been their first Women’s World Cup final, England – now beaten in the semi-finals of three successive major tournaments – will instead play in Nice on Saturday in the third-place play-off, against Holland or Sweden.

Afterwards, Neville said of the post-match huddle he had had with his players: “I didn’t want to see tears. You lose, but I thought the way we lost was exactly the way I wanted us to play.

“The courage they had to play football and keep going and battle – they left everything out there. We have no regrets. We’ve come to the World Cup and given it our absolute all, and that’s what I said to them.

“I didn’t want to see tears – there should be smiles. We’ve had the best 46 days of our life and it’s not ended yet.”

He added: “I can’t say to my players unlucky, because they don’t want to hear that. They’re not listening probably to the words I’m saying in terms of I’m proud of them, they left their hearts and souls on the pitch – that’s white noise to them. Because they wanted to win.

“That tells me we are closer than we have ever been. Maybe in the past we’ve accepted ‘semi-final, we’re going home and we’ll get plaudits’. But my players don’t want to hear that any more. They’re sick of it, and so am I. We came here to win and we didn’t do that.

“I think we’ll have to allow 24 to 48 hours for this to sink in, for them to get over the disappointment. But elite sport means that on Saturday in Nice we have to go and produce a performance.”

Houghton stepped up to take the penalty with Nikita Parris having already had two saved in the tournament.

While Neville told BBC Sport “no blame should be attached” to the skipper, Houghton said she was “gutted” and felt she had “let the team down”.

She added: “We’ve got to go and try and get a bronze medal now.”

In the build-up to the game, there had been questions put to the US about whether they had been showing signs of arrogance, and relating to a visit made by at least one member of their staff to England’s team hotel on Sunday.

Boss Jill Ellis said after the match: “It goes back to the mindset. We’re here for one thing. Not external noise. We’re here to win the trophy. So everything we talk about and focus on is about that.

“When you are the premier team, you’re always going to have noise, external stuff, to deal with.

“But I’m around the players a fair bit and the conversations I hear are about the game. I think they are professionals.”

Ellis also confirmed forward Megan Rapinoe had sat out the contest due to a “slight strain to her hamstring”.