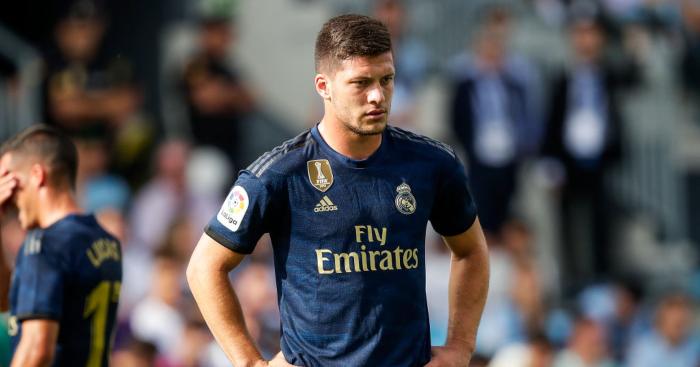 Luka Jovic has denied that he could be leaving Real Madrid on loan this summer – only two months after joining the club.

The striker joined the LaLiga giants from Eintracht Frankfurt for £62million this summer after a brilliant season in the Bundesliga.

Jovic bagged 27 goals in 2018-19 as Frankfurt finished seventh in the Bundesliga, with the likes of Liverpool and Chelsea also linked with his services.

The Serbia international came off the bench to play for nine minutes as Real Madrid got their league campaign up and running with a 3-1 victory over Celta Vigo on Saturday.

And Jovic has dismissed any chance of him leaving before the European transfer deadline on September 2, with AC Milan reported to be interested in a loan deal.

“[Zidane] believes in me and his story has not changed during this time as we work together,” Jovic told Novosti .

“I am learning from him day by day, which I am very pleased with, because he, as a player and as a coach, is at the very top of world football.”

Jovic added:  “[The media] always make me laugh. [They] will always deal with such stories [about me leaving Real Madrid].

“I have been used to all kinds of comments since the beginning of my senior career, I have come to terms with the fact that there can always be those comments. Time will tell what is true.

“I’m ready to give the maximum and offer everything I can. I don’t even expect to play all of the games right away.

“However, through work and effort, I will reach my goal. I am pleased with the way the [club] have accepted me, I wish I could have scored at the start, but I am in no hurry. I know my [time] will come.

“It takes time to adjust to the club, the players, the style of play itself.

“I prefer to constantly contribute to my team and grow with it than to shine in a few games without me being anywhere. Each of us is different, adapting in different ways.”