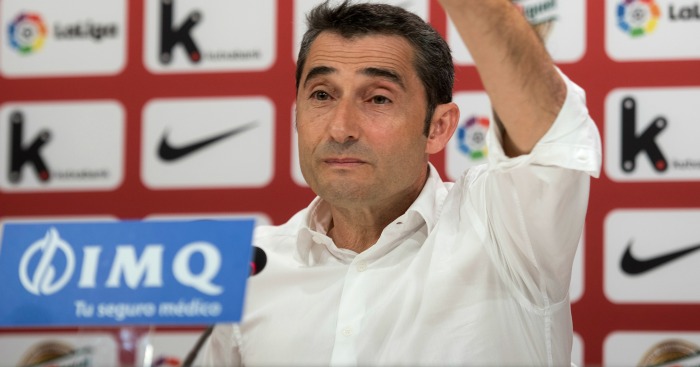 Barcelona president Josep Maria Bartomeu believes new boss Ernesto Valverde has all the skills to succeed at the Nou Camp.

The 53-year-old has agreed a two-year deal to replace Luis Enrique at Barca after leaving Athletic Bilbao.

Valverde played for Barca for two years between 1988 and 1990 and Bartomeu expects Valverde to be able to handle managing the Catalan giants.

“I have spoken personally with Valverde and he is happy and excited about the challenge of coaching Barca,” he told a press conference on Monday.

“Valverde has the ability, the knowledge and the experience. He promotes players from the youth teams and he has a style and a way of working like ours.

“He has a philosophy of the game that is very Barca and he is a hard worker. Also, he is passionate about applying technology to both training and matches.”

Valverde won the Cup Winners’ Cup and Copa del Rey as a player at Barca, while he also played for Espanyol, Athletic and Real Mallorca, winning one senior cap for Spain.

Since retiring in 1997 he has managed Espanyol, Olympiacos – twice – Villarreal, Valencia and Bilbao.

His most successful period came in Greece, where he led Olympiacos to three domestic league titles and two cups in his two stays at the club, while he also guided Espanyol to the UEFA Cup final in 2007, losing on penalties to Sevilla.

At Athletic he finished fourth, seventh, fifth and seventh respectively in LaLiga, reached the Copa del Rey final and the quarter-finals of the Europa League.

Enrique announced in March that this would be his final season at Barca and his last game in charge was Saturday’s Copa del Rey final victory over Alaves.

That was the ninth trophy Barca had won during Enrique’s three years in the hotseat, which included league and cup doubles in 2015 and 2016.

Barca were unable to make it a hat-trick of doubles this season as they finished runners-up in LaLiga to Real Madrid, while in the Champions League they were knocked out at the quarter-final stage by Juventus.

A host of managers had been touted as possible replacements for Enrique, including Jorge Sampaoli, Diego Simeone and Ronald Koeman, but Valverde had emerged as the clear front-runner among Spanish media and bookmakers in recent weeks.