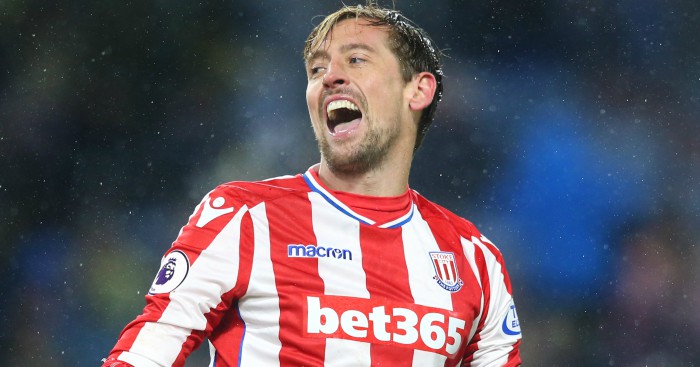 Burnley have signed former England striker Peter Crouch from Stoke on a deal until the end of the season – with Sam Vokes heading in the opposite direction.

Crouch, who turned 38 on Wednesday, has been largely used as an impact substitute for the Potters this season, featuring on 23 occasions in the Sky Bet Championship but only two of those were starts and he has scored just once.

Clarets manager Sean Dyche is convinced Crouch can still prosper in the Premier League, where the towering former Aston Villa, Southampton, Liverpool, Portsmouth and Tottenham target man has a record of 108 goals in 462 games.

Speaking at his press conference to preview Burnley’s clash with Southampton this weekend, Dyche said on the club website: “There’s no issue about his fitness and I think he has an intention and a desire to still make a mark in football.

“We know what a good character he is and he still has that edge. We know he’s an effective footballer and he has a hunger to come here and make a mark.”

The move ends Crouch’s seven-and-a-half-year spell at Stoke, where he made more than 250 appearances and scored on 62 occasions.

Burnley announced the signing on Twitter with a video of a toy robot – a nod to the dancing celebration made famous by Crouch – entering the club’s training ground before being knocked over by a football kicked by the veteran.

“My game has probably changed a little bit. I’m not 25. But my attributes haven’t waned. I never really had blistering pace, so I haven’t lost that.

“I know I can impact games at this level. I scored goals last season in the Premier League and I know I will do the same again if given the opportunity this year.”

Vokes, meanwhile, has signed a three-and-a-half-year deal at Stoke, who paid an undisclosed sum to Burnley for the Welsh international.

Vokes has scored three goals in 20 Premier League outings this term, 10 of which have been starts.

The 29-year-old joined Burnley from Wolves in 2012, having already had a loan spell at Turf Moor.

He said on Stoke’s website: “This is a great club, a Premier League club, a club which is striving to get back to the Premier League.”

“The Championship is a really tough league so it is all about putting together a great squad, and we have that here.

“Burnley was a huge part of my life, I really found my home there and I made a lot of good friends there, but it was time for me to move on – and what better club to do that with than Stoke City.”