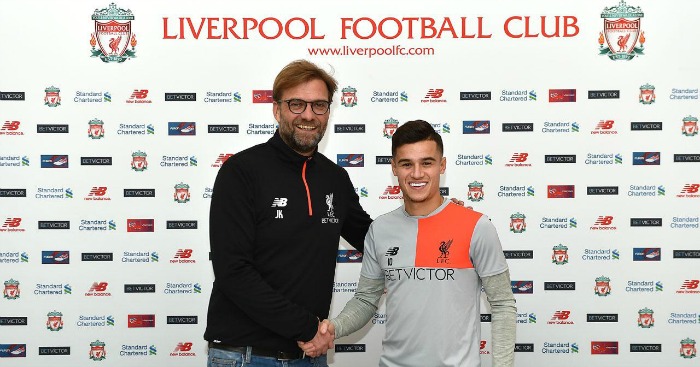 “What’s most important and most exciting is that, at just 26 years old, Luis Suarez’s best years are still ahead of him and we now know we’ll be seeing him reach that potential in a Liverpool shirt,” said Brendan Rodgers in December 2013, his smile as wide as the Mersey. Liverpool fans rejoiced.

“I hope to play for many years here,” Suarez then said. “This is a great team and everyone around the world knows Liverpool. To sign a new contract with Liverpool is unbelievable for me because I am so happy here at both the club and also in the city.” Liverpool fans pinched themselves.

Unfortunately for Suarez, his hopes were dashed. Despite his dream of playing for Liverpool for many years, the striker was forced to join Barcelona seven months later, presumably against his wishes. In Suarez’s defence, he has dealt admirably with the setback.

Less than a year ago, the BBC Sport’s website announced that ‘West Ham midfielder Dimitri Payet has signed a new contract that ties him to the club until the summer of 2021’, but someone must have forgotten to do a double knot because Payet has already made his second Marseille debut.

These are hardly isolated incidents, merely high-profile ones, so the widespread joy among Liverpool supporters when Philippe Coutinho’s contract was announced last week jarred a little. Coutinho made the same noises as those who had gone before him, and yet the reaction from fans was precisely the same. Take that, Barcelona!

Not all on Merseyside are convinced. “We’ve had plenty of players in the past Liverpool who have signed big contracts then moved on,” Jamie Carragher said on Sky Sports. “If Philippe wasn’t happy at Liverpool then he wouldn’t have signed the deal.”

Carragher’s second point is just as valid as his first, but contentment can quickly change and heads can quickly be turned. While Liverpool’s former player is realistic enough to accept the tunnel at the end of the light, that is not shared among supporters buoyed by the news.

A disclaimer: I am not saying/claiming/predicting that Coutinho will leave Liverpool this summer, next summer or any other summer. I am saying that him signing a new contract makes it no less likely, or at least so marginally less likely that it isn’t worth basing your mood upon. Many times bitten should mean many more shy.

New contracts are celebrated second only to new signings as indication of a club’s ambition and proof of progress. The club megastore welcomes those wishing to get names on the back of shirts and then reacts in disbelief when that player leaves, as if the transfer market has been sprung on them like a visit from the tax inspector in March.

Part of the satisfaction in Coutinho’s contract renewal is that no minimum fee release clause was inserted, but that is hardly cause for optimism. Suarez’s transfer fee in July 2014 was eventually revealed to be £65m, £10m below his release clause. The shift in power from clubs to players and agents makes the employee the powerbroker in any deal. Once the player has made their desires known – and often public – their value dictates that there is little to no point keeping them against their will.

There is a degree of wilful – and understandable – gullibility at play here. As a supporter, looking on the underside of every incident and action makes for a depressing pastime: Promotion means that players could leave, title victories create unrealistic expectations, successful signings mean the head of scouting and recruitment will be poached. Unless you support Barcelona or Real Madrid, your club is part of a food chain and is prone to shark attack. One available antidote is to place fingers in ears and over eyes and pursue a path of glorious optimism – it could well be a mantra for 2017.

Celebrating new contracts as proof of anything is like marrying someone who has already been married four times before and smiling sweetly as your partner says the words “until death do us part”. It takes romance, a leap of faith and even suspension of belief not to say “Tony, didn’t you say all this and thought you meant them then too only to run off with Carol from next door?”

The truth is that very few elite footballers are interested in “in sickness and in health”. As soon as the club fails to match their own individual form or ambition, conversations will begin with agents about engineering a move. New contracts might occasionally be statements of commitment but they also indicate a pay rise and are accompanied by significant signing-on fees and a cut for the agent.

To say contracts are now meaningless for clubs is reactionary and foolish, but nor are they a true measure of loyalty – that can only be judged in hindsight. Instead, a signed long-term deal is a guarantee, an insurance policy and an indicator of a likely future transfer fee. Whether any of those things are worth supporters celebrating is doubtful at best.